Posted on October 27, 2016 by Office of Public Affairs 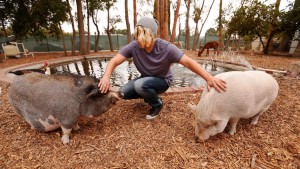 A student with pigs on the farm at an LA continuation school
(Picture by Al Seib, Los Angeles Times)

John R. Wooden High School is small. It doesn’t have a football field or a swimming pool or a gym. But it has a farm. And the farm has become a central part of Alex’s life.

“It’s my job to go around…every morning and feed the animals,” Alex recently told students visiting the grounds during his first-period animal behavior class as he took them by a pair of tussling goats, past the shed filled with hay for the two alpacas, toward the pigs who were lying by the small pond.

Alex, who lives in a foster care group home, used to run away for days at a time to visit his girlfriend. He’d ditch school at Grover Cleveland Charter High in Reseda and go to the library instead.

Since transferring to Wooden this year, he’s been at school most mornings.

“It’s good for me,” Alex said. “If this is my first period, it kind of makes me want to come to school every day.”

Wooden is a continuation school, mostly for students who are behind in credits and at risk of not graduating. As schools in L.A. Unified increasingly turn to online credit recoveryclasses to allow more students to graduate on time, the staff at Wooden uses the farm for hands-on, face-to-face learning.

Instead of chemistry and biology, students can take environmental studies or plant and soil science, in which they develop a plan for a drought-resistant garden.

Wooden’s operating philosophy — that students can thrive if they get personalized attention and learn concepts through doing — is one that state education officials increasingly are espousing.

California is among a number of states that recently adopted Next Generation Science Standards, which focus on forging connections between classes and integrating scientific investigation into lessons, instead of just having students memorize concepts.

Along those lines, science teacher Stephanie Darling’s first-period class doesn’t take place in a classroom with her standing in front of a whiteboard. Usually, she does not even lead lessons. Students learn them by her side at the farm.

On one September morning, some of her students were tending to the animals — feeding the chickens, cleaning water bowls — while others were watering plants or working in the organic garden.

All of the animals were rescued. A few years ago, with the help of the nonprofit Kindred Spirits Care Farm, the school planted the garden. Now tomato plants wind around arches, offering shade to the basil plants below.

Bryant Santoyo’s first-period task was to shovel mulch into the garden.

At first, he couldn’t explain why he was shoveling.

But Darling pushed him, asking: What is this for?

They’re going to grow blueberry plants, he told her.

What will the mulch do?

Cover the ground to keep it cool and act as fertilizer, he answered, correctly.

Bryant, 17, enrolled at Wooden after dropping out of a few other schools. To keep his job at Ralphs, he needed to prove he was in school.

He’s liking school now, he said, and the way Wooden  gets him to learn new things.

“We see the process of something growing,” Bryant said.

One goal of the new science standards is to attract students in populations underrepresented in science, technology, engineering and math careers, and prepare them for those fields, said Derrick Chau, senior executive director for instruction at L.A. Unified.

Estephanie Aparicio, 16, wants to be a veterinarian. She fell behind at her former school, Reseda High, after she was bullied and suffered from panic attacks and depression.

At Wooden, she’s not only learned the basics of caring for animals, but has found that spending time with them has been therapeutic.

“My anxiety has basically gone away,” she said. Her favorite animal is Evan, a white alpaca.

On Oct. 22 the school will invite the public to Food Day LA to learn about the farm, garden and how to bring urban agriculture to their backyards.

One concern about continuation schools is whether they’re rigorous enough to prepare students for college.

Darling is Wooden’s only science teacher. She teaches animal behavior, plant and soil science and environmental studies. Animal behavior is an elective, but students who enroll in the other classes use those as science requirements for Cal State University admission, Darling said. As for the University of California, only plant and soil science counts toward science entrance requirements.

Students interested in attending UC schools can take extra science classes after school or complete different assignments in one of Darling’s existing classes.

Alex takes an integrated-coordinated science class with students in Darling’s environmental studies class to get credit for the specialized instruction if he applies to UC.

His hope is to graduate in 2017, attend a community college for two years and transfer to a four-year school to become a nurse.

He hasn’t ditched school in weeks and doesn’t plan to, he said while petting Peanut.

“It’s peaceful, and I like the animals,” he said. “They’re better company than people.”

This entry was posted in Agricultural Education, Food Access, Nutrition. Bookmark the permalink.