Posted on October 19, 2016 by Office of Public Affairs 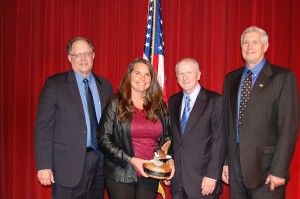 Dr. Jones, who serves as treasurer of USAHA, was honored for a long list of accomplishments in public service, including directing the state and federal partnership to eradicate an outbreak of exotic Newcastle disease; successfully directing the response to detections of avian influenza; and consistently demonstrating an ability to work cooperatively with other government agencies, the public, and industry in emergency animal disease planning efforts at the local, state, and federal levels.

“This is a very prestigious award at USDA, and no one is more deserving than Dr. Jones,” said CDFA Secretary Karen Ross. “Dr. Jones is a dedicated public servant and an outstanding leader on the many complex issues affecting California’s farmers and ranchers.”

Dr, Jones began her career at CDFA in 2001, was named director of the agency’s Division of Animal Health and Food Safety Services in 2004, and was named State Veterinarian in 2010.

This entry was posted in Animal health. Bookmark the permalink.