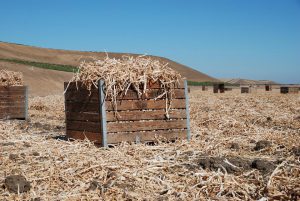 The end of the drought in California has led to increased volume and great quality, says Bill Christopher, president of Christopher Ranch.

By Tom Burfield, The Packer

Most of the U.S. fresh garlic now being harvested is coming out of California, where grower-shippers say supplies are plentiful and quality is good.

“The size is good, and the quality is some of the best we’ve ever seen, especially on some of the early garlic.”

California growers finally are out of the drought, which caused Christopher Ranch to reduce garlic plantings by about 10% the past couple of years, he said.

This year, the company’s volume actually is slightly above normal.

“We had a great California crop this year,” Christopher said.

Planting took place from September through November, and harvesting started in June and will continue until early September.

“Weather has been cooperative,” he said.

The rains over the winter and spring “came at the right time.”

“The reservoirs are at record levels. The snow melt in the Sierras is good,” he said. “It’s a change of pace from what we’ve had the past few years.”

A mid-June heat wave was helping the garlic dry and cure, he said.

The Garlic Co. in Shafter, Calif., got a late start on harvesting this year, and things were running behind in early June, said Joe Lane, one of the owners.

“We had a pretty cool spring,” Lane said.

But by late June, the warm weather helped picking get caught up, he said.

This year’s crop has “the best quality we’ve had in a few years,” Lane said.

Rain was a big help, but the cold winter weather was even more important, he said, adding that he would like to have seen a few more frost events.

Volume at The Garlic Co. is up slightly because of added acreage and better-than-average yields resulting from the good weather.

Most of the firm’s garlic, much of it peeled, is destined for foodservice operators, he said.

I Love Produce LLC, West Grove, Pa., is finishing up its season from Mexico and has new-crop garlic arriving in July from Spain and China, said president Jim Provost.

“We are also waiting for information about the new California crop,” he said.

Spain and China both have excellent new-crop garlic, Provost said.

“Yields are up 10% to 20% on both accounts, and when yields are up, it is normally an indication of healthy quality and a larger range of sizes,” he said.

Garlic volume for all Northern Hemisphere growing areas is up.

“Farmers planted more garlic as a result of tight garlic supplies and higher-than-normal markets the last two years,” he said.

Typically, when a crop makes money, more of that crop is planted until the cycle goes the other way, Provost said.

He added that prices should be “promotable” this season.

“I see the market staying pretty stable,” he said.

Growers are faced with rising costs of things like labor and insurance, he said, but higher yields and lower growing costs are helping to offset those.

The popularity of garlic in the U.S. continues to increase in part because of the growing number of immigrants, especially Asians, who tend to consume more garlic than native-born Americans, Christopher said.

Also, consumers are becoming more aware of the health benefits of garlic, and they’re seeing it featured on TV food shows, he said.

“Everyone is eating garlic now,” Christopher said. “It provides great flavor, and the health benefits can’t be ignored.”

See the original article on The Packer site here.