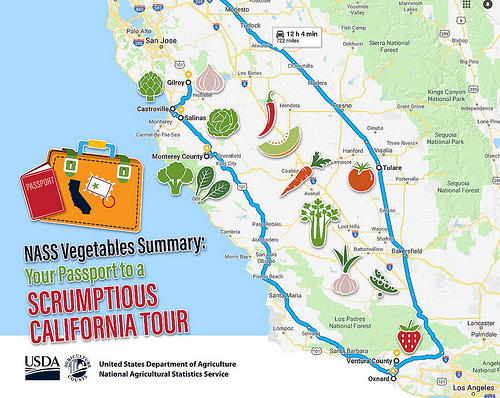 Touring the “salad bowl of the world” provides a fun and delicious way to experience California’s rural areas and produce. Check out the NASS Vegetables 2017 Summary for the data behind the California veggie tour.

Get your foodie passport ready to tour scrumptious California veggie country! With over 970 thousand acres of harvested vegetables, melons, and strawberries, the just released USDA NASS Vegetables 2017 Summary places California at a whopping $7.85 billion in vegetable production – over half of the U.S. total of $13.8 billion. Where are all of these amazing crops grown? Let’s take a trip through some of the most delicious and prosperous rural regions in the Golden State.

Just as the treasured garlic clove rests behind pale, papery covers, the small farming community of Gilroy waits to be discovered off the 101 and 152 travel corridors. Gilroy is centrally located at the southern gateway to Silicon Valley, about 30 miles south of San Jose. California produced over $322 million worth of fresh market garlic. Wowzers! Gilroy may not be in the largest garlic-producing county, but its farmers might claim to be the proudest. Look closer to discover an amazing world-class garlic community touting the internationally renowned Gilroy Garlic Festival and continual celebration of all things “garlicky.”

The NASS Vegetables 2017 Summary positions California as a leading example of rural prosperity. The Golden State is the top producer of artichokes, head lettuce, leaf lettuce (yeah, it’s different from head lettuce), romaine, broccoli, spinach and more. Weather, alternating between a moist marine layer from the nearby ocean and cool sunny days, provides the perfect climate to grow everyone’s favorite smoothie superfoods in its verdant valleys.

‘Lettuce’ head over the 152 to Highway 101 for more tasty fun in Monterey County, an area often referred to as the “Salad Bowl of the World.” First stop is a Fibonacci favorite, the butter-loving artichoke (it grows according to the mathematical sequence discovered by – you guessed it – Fibonacci). Northern Monterey County features the U.S. artichoke capital in the prosperous rural town of Castroville. From bold artichoke sculptures to daring recipes, the annual Artichoke Festival celebrates California’s official state vegetable. According to the Vegetables Summary, California is the sole U.S. producer of artichokes, with production valued at more than $65.5 million in 2017.

Monterey County boasts some of the most beautiful farmland east of Highway 1. Literary aficionados may know Salinas for the annual Steinbeck Festival (you may have heard of John, great American author and all that), but did you know the Salinas Valley is also recognized as one of the top leafy green producing areas in California? Some of your favorite green superfoods grew up the Salinas Valley of Monterey County. California produced over $850 million of the nation’s $926 million broccoli crop and more than half, $242 million, of the nation’s $401 million spinach crop. What a vegetable delight!

Scrumptious strawberries make salads, cakes, and even the annual NASS Vegetables Summary more delicious. Take Highway 101 down the coast to Ventura County in May for the California Strawberry Festival held in Oxnard. The festival celebrates the $3.1 billion California strawberry industry (out of the U.S. total of $3.5 billion).

As you complete your culinary loop back north, consider a drive up Highway 5 or 99. This is the famous Central Valley, where California farmers work hard to feed the country and the world the best foods. If it’s tomato harvesting season, don’t be surprised to see a few tomatoes strewn along the roadside. Sometimes they fall out of the steady stream of overflowing trucks on their way to the processing plants. The Vegetables Summary suggests everyone loves tomatoes – it’s a billion-dollar crop for California and the United States.

No matter which direction you drive in California, you will see a great variety of vegetable crops and a range growing conditions and seasons. You may see small organic farms supporting the burgeoning farm to fork movement. Down the road, you may come across larger farms that grow vegetables that end up on people’s plates across America and the world. No matter which way you turn, you will be amazed at what California farmers can grow and thankful for their bounty.