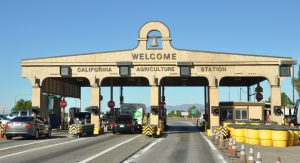 CDFA’s Border Inspection Station at Blythe, along I-10 near the Arizona border.

NOTE – Under California law, drivers transporting out-of-state empty beverage containers are required to declare the material by submitting an Imported Materials Report at one of 16 CDFA Border Inspection Stations across the state.

In a three-day ‘recycling fraud sting,’ California law enforcement and government officials stopped eight truckloads of recyclable bottles and cans from coming into the state over the Arizona border, according to CalRecycle.

The total payload carried by the accused recycling smugglers amounted to nearly 59,000 pounds of empty beverage containers—equivalent to $87,000 if the deposits were redeemed.

California offers the California Refund Value (CRV) to their consumers, allowing for the return of beverage containers at certified recycling centers for payment ranging from 5 to 10 cents, depending on the size of the container.

Californians pay CRV fees when they purchase drinks in these containers. When bought out of state, the CRV redemptions don’t apply. 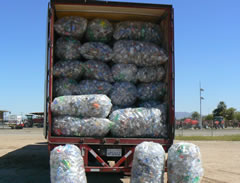 Contraband seized in the recycling sting.

“Importing out-of-state empty beverage containers for CRV redemption is a crime,” CalRecycle Director Scott Smithline said. “To prevent this type of fraud, drivers transporting empty bottles and cans into California are required to pass through one of CDFA’s 16 border inspection stations—and CalRecycle is working alongside our law enforcement partners to make sure that happens.”

Eight truck drivers were arrested in the sting:

All of the drivers will be charged with felony recycling fraud, conspiracy, and attempted grand theft, according to CalRecycle. Those crimes can carry sentences ranging from six months to three years behind bars.

The sting represented a combined effort between CalRecycle, the California Department of Justice’s Recycle Fraud Team, CDFA, and the California Highway Patrol.