Posted on November 20, 2018 by Karen Ross, Secretary, California Department of Food and Agriculture 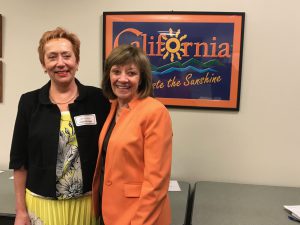 I recently had the opportunity to meet with Marianne Vaes, Agricultural Counselor for the embassy of the Netherlands in Washington DC. Counselor Vaes was here with her advisor Caroline Feitel to build upon our close relationship with the Netherlands.

After visiting the Netherlands in 2015 as part of our first Climate Smart Agriculture mission to study climate analogues, we continue to collaborate closely with on climate change, including several information-exchange webinars on potential agricultural management practices that could be used to adapt to a changing climate.

Counselor Vaes has experienced a changing climate firsthand with drought conditions in the Netherlands. She brings with her a wealth of knowledge on agriculture systems that are facing many of the same challenges we face here in California.

In addition to Counselor Vaes, our recent meeting included representatives from the Dutch Consulate in San Francisco, the University of California VINE (Verde Innovation Network for Entrepreneurship); and CDFA’s State Veterinarian, Science Advisor, and contributing scientists at our agency. The discussion centered on several topics, including antimicrobial animal use and resistance efforts, agricultural technologies, and the soon to be held World AgriFoodTech 2018 Conference in the Netherlands, which will focus on technological innovations and recent agricultural policies in general, including the recently-introduced Circular Agriculture Policy in the Netherlands.

It was a pleasure meeting with Counselor Vaes and we look forward to continuing to work together on important issues that impact agricultural production, so that we may continue to produce food to feed an ever-growing global population.