Pest and Disease Prevention Projects Get a Boost from USDA

Posted on May 25, 2012 by Karen Ross, California Agriculture Secretary, and Linda

California’s approach to pests and diseases is as complex as the problem itself, but perhaps the most important element of our efforts is prevention.  Prevention projects in California and throughout the nation have been given a much needed boost from USDA Secretary Tom Vilsack, who has just announced his agency will support 321 projects with $50 million in funding from the 2008 Farm Bill (see the press release:  http://www.aphis.usda.gov/newsroom/2012/05/pest_disease_funding.shtml).

Our border stations intercept thousands of illegally transported plants, fruits and other commodities that would otherwise pass uninspected; our detector dog teams scour package facilities for unmarked or otherwise prohibited shipments that could introduce infestations in our state; and we employ a comprehensive system of pest traps, surveys and inspections to detect invasive species as soon as possible if they do make it in.  And when we do have to control or eradicate an infestation or outbreak, our decisions are guided by the principles of integrated pest management.  Each of these elements must help us fulfill our mission protect agriculture while also preserving our environment. 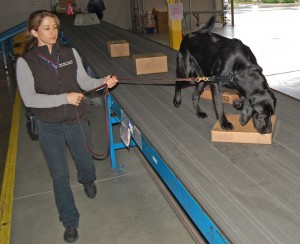 We are proud of California’s efforts to prevent, detect and respond to invasive species.  These funds will improve and extend our ability to protect California’s agriculture, environment and habitat.  I encourage you to use the links above to peruse the various projects that we wll now embark upon as we put this very important piece of the Farm Bill into action.