Latinos move from fields to office – from the New York Times 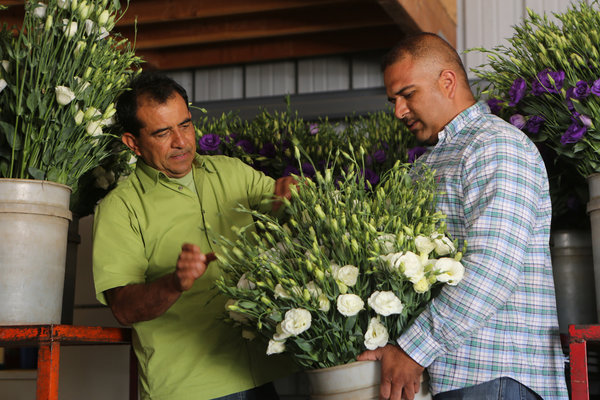 When he was 15, an immigration raid at a Japanese flower nursery turned Arturo Flores’s life around.

The owners needed a new group of workers to replace the ones removed by immigration officials, and Mr. Flores landed a job cutting flowers. He slowly worked his way up to packaging and delivering them. In the mid-1980s he got a call from two businessmen looking to start their own cut-flower business. They asked him to manage deliveries and distribution. Today Mr. Flores, 50, is the president of Central California Flower Growers in Watsonville, a distributor in Santa Cruz County that sells more than 100 varieties of flowers and other plants.

Farming businesses in the United States are still dominated by whites, but Mr. Flores (whose last name means “flowers” in English) is one of a growing number of Latinos who own or operate farms in the country. While the overall number of farms in the United States decreased by 4 percent from 2007 to 2012, during the same period the number of farms run by Hispanics increased by 21 percent to 67,000 from 55,570, according to data released in May from the government’s 2012 census of agriculture. The numbers signaled a small but consistent pattern of growth in agribusiness among Latinos, many of whom have gone from working in the fields to sitting in the head offices.

Many, like Mr. Flores, emigrated from Mexico in the 1970s and ‘80s and worked their way up from picking produce to managing the business. They have classic American bootstrap stories of grit, determination and a little bit of luck. Some own the land they till while others rent. Many employ Mexicans whose language and job duties they understand intimately.

Salvador Vasquez, 56, who owns Vas Vision Berry Farms, a berry grower for Driscoll’s in Watsonville, came to the United States from Mexico when he was 11. Mr. Vasquez said it was his ability to communicate in English and Spanish with the workers and the supervisors on the farms in Watsonville that helped him move up from being a fruit picker to becoming a supervisor.

But it was not an easy ascent. In 1989, Mr. Vasquez worked as a supervisor during the day and in the fields at night. “If I slept nine hours in five days it was a lot,” he said.

By the 1990s, he supervised more than 2,500 farm employees, and by 2000 he had become part owner of the business. “You have to work hard for the American dream, but it is possible to achieve,” he said.

Sergio Silva, 53, is the chief executive of Rancho Espinoza in Salinas, Calif., a company that grows and distributes calla lily bulbs under the name Coastal Callas. Mr. Silva, whose parents obtained green cards after being guest workers in the California agriculture business, came here from Mexico when he was 13. After struggling to learn English, he dropped out of high school in the 10th grade and went to work in the Salinas Valley, “doing any field work you can think of,” he said.

At 22, Mr. Silva got a job at a vegetable transplant production company, where seeds are started indoors and later moved to fields. It was owned by two venture capitalists, and he worked his way up from dropping seeds in the soil to operating machines and supervising. By 1994 he had invested $15,000 of his savings to buy shares in the company, and he ultimately became its president.

oday he and his partner, Adrian Espinoza, 36, a first-generation Mexican-American, have invested $1.4 million of their own money into the flower company.

The majority of Hispanic-owned agricultural businesses are family-run like Mr. Vasquez’s; he employs his daughters to help him run the business. Jose R. Fernandez, the president of Fernandez Brothers, a strawberry grower for Naturipe Farms in Salinas, whose clients include Stop and Shop, Costco and Safeway, expects his 19-year-old son to go into the business.

Some of the younger, second- or third-generation Hispanics entering the industry have advanced degrees in agriculture or business.

“First-generation farmworkers have worked their way up in terms of responsibility, and now we see many of their children going on to have the opportunity to pursue higher education,” said Charles Boyer, the dean of the Jordan College of Agricultural Sciences and Technology at California State University, Fresno. “These people are increasingly seeing that agriculture has a very wide window of opportunity from the business side to the quality-control side to the science side.” Mr. Espinoza, of Rancho Espinoza, graduated from Fresno State with a degree in plant science.

While more Hispanics are running farms, many of them in the region say federal immigration policies have made it increasingly difficult to find workers. Mr. Vasquez, the berry grower, said 12 acres on his farm were not harvested last year because of the lack of labor. “That’s an incredible loss,” he said. Mr. Silva, the calla lily grower in Salinas, said he supported guest-worker programs that allowed seasonal workers to come into the country legally.

Perhaps because of their own backgrounds, many of the farmers prided themselves on treating their workers well. Mr. Flores, the flower distributor in Watsonville, said he was looking into retirement plans for his workers. He showed off a neat canteen area that included an altar with Catholic symbols like the Virgin Mary, coffee makers and a grill still greasy from the meat that had been cooked on it that day.

Much of the growth in Hispanic-operated farms around the country has been concentrated in small and midsize farms. Some small-scale farmers are hoping that the increased popularity of organic produce will also increase revenue.

Francisco Serrano, 52, used to administer 200 acres of industrial farmland before scaling down to a much smaller organic farm in Watsonville where he grows produce like kale and beets. Mr. Serrano, who tired of the grueling hours at the industrial farm, is leasing 11 acres from a local nonprofit organization called the Agriculture and Land-Based Training Association, or ALBA, which trains mostly Latino students how to become organic farmers.

Like many farmers, Mr. Serrano rents the land because it is cheaper to do so. An acre in this region can cost an average of $40,000. He said the recession had complicated the plans of Hispanic farmers he knew, with some who tried to buy land losing both their homes and land. By contrast, farmers like Mr. Silva are hoping investing in land has a big payoff.

Mr. Silva recently secured a line of credit to purchase an additional 10.26 acres and greenhouses worth $1.3 million. On a recent weekday afternoon, a bouquet of calla lilies in shades of deep purple and hot pink sat on Mr. Silva’s desk. “I just pray like hell that I can make it work,” he said.