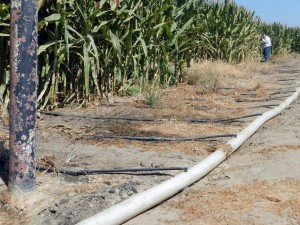 At last check, 75 percent of grape growers in California used drip or other low-volume irrigation methods. The rate was 71 percent for almonds and 63 percent for canning tomatoes.

Dairy feed crops? Not so much. The rate was just 7 percent for corn and 2.5 percent for alfalfa, based on a 2010 survey. These farmers much prefer flood irrigation, at least when the water is abundant.

That could change, based on the discussion Wednesday at a farm about 6 miles southeast of Merced. It has a test plot for corn grown with drip lines, which deliver water close to the roots, reducing losses to seepage and evaporation.

“We wanted to utilize – especially in a drought – our water most efficiently,” said John Cardoza, a project manager in the Modesto office of Sustainable Conservation. The group, based in San Francisco, helps farmers and other business people protect the environment.

Sustainable Conservation joined with Netafim USA, which makes irrigation supplies in Fresno and elsewhere, to study the potential for drip irrigation in dairy feed crops. The gathering was at De Jager Farms, which offered a few of its 17,000 acres for the project.

Flood irrigation typically takes about 40 vertical inches of water over the growing season for corn, said Nate Ray, one of the farm managers at De Jager. The drip system reduced that to 28 inches last year. The yield per acre improved, thanks to efficient application of the manure-tainted wastewater that is part of the irrigation supply at dairy farms.

“It’s probably been a 20 percent increased yield and a good foot of water that we’re saving,” Ray said. He also noted the time savings: With flood irrigation, it can take 14 or 15 hours for the water to cover a field.

Widespread use of drip systems by dairy farmers would help extend the water supply for all Californians. It also could boost the economic health of the dairy industry, which employs thousands of people in farming and processing in the Northern San Joaquin Valley.

Drip irrigation has one drawback, many people in farming note: It reduces the groundwater recharge provided by flood irrigation. This is the topic of an upcoming study that will include Stanislaus County almonds.

Drip systems have been widely adopted in orchards and vineyards in part because the lines can be laid once and tractors and other rigs can work around them. The same goes for microsprinklers, another low-volume technology that directs water to the roots.

The approach to drip irrigation differs in dairy feed fields, which are planted and harvested two or three times a year. The drip tape can either be buried deep enough to avoid disturbance, or it can be a disposable type that is removed after harvest. Netafim collects the waste and recycles it into new tape.

Dairy drip irrigation poses other challenges – the wastewater has to be filtered to remove most of the solids in the manure so they do not clog the tiny pores in the irrigation lines. Farmers also need to watch for gophers and other creatures that can damage a system.

Despite this, the effort shows promise, including reduced risk to groundwater quality from nitrates, a manure byproduct that can make people sick.