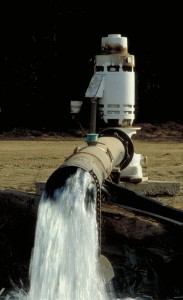 Miles Reiter is a member of the California State Board of Food and Agriculture and chairman and CEO of Driscoll’s, a leading supplier of fresh berries.

Reliable groundwater supplies in California are essential to the health and well-being of all Americans. Much of the food consumed in the United States, including about half of the fruits and vegetables, is grown in California. Without an improved management system of groundwater in the state, California’s agricultural capacity will become smaller and unreliable. The healthiest elements of the nation’s food supply will become highly variable in availability and cost, with some items almost disappearing entirely.

California’s groundwater resources are in jeopardy. They have been steadily declining throughout much of the state for many years, with current declines at rates never seen before. Along the Central Coast, where I live, groundwater makes up over 80 percent of the water supply. As a result of extraction in excess of replenishment, we are experiencing increased saltwater intrusion into the groundwater and general declines in water quality throughout the area. If this trend is not halted, we simply will not be able to provide the healthy food, jobs and economic vitality that go with a sound agricultural infrastructure.

If we are to protect California’s agricultural capacity, we must do a better job of protecting our groundwater. The solution needs to start at the local level. Four years ago, before the current drought started, our community in the Pajaro Valley around Watsonville was concerned about declining groundwater levels and saltwater intrusion. Local landowners and growers, the Resource Conservation District of Santa Cruz County and other groups joined together to launch a forward-thinking and action-oriented public/private partnership called the Community Water Dialogue.

Our mission was to solve the valley’s water problems. Our goals from the beginning included protecting the valley’s agricultural capacity, deploying diverse strategies that would require costs and sacrifices by all to restore the aquifer, and recognizing that we needed to solve our problems on our own and could not rely on outside fixes. We deployed a number of water-saving strategies that have made a difference. We have a long way to go to a sustainable valley, but pumping in 2013 was more or less the same as the amount pumped in 2008, despite a series of very dry seasons. Our efforts have not been easy, and not without long and passionate debate about the right approach. There will undoubtedly be decisions in the future that will be difficult and often painful.

I strongly support managing our precious groundwater resource through a combination of local management operating within the context of statewide objectives and support. We must recognize that significant change in the way we utilize our groundwater is needed. When half-measures and partial fixes were adopted in the past, they have not worked. It is time that California adopts a comprehensive, long-term plan that will protect this resource against overuse and future droughts. Local agencies need tools and the authority to effectively manage their groundwater.

Those who want to maintain the status quo argue that sustainably managing our groundwater will reduce our agricultural economy and devalue land. I have absolutely no doubt that we will do far greater damage to our economy and our communities if we fail to act. The result of inaction will mean running out of groundwater, worsening subsidence, and increasing saltwater intrusion.

My family has farmed California’s incredibly rich Central Coast for nearly 150 years. Groundwater depletion threatens the future; however, our local efforts to address this issue give us a chance to save productive farmland and the communities that depend upon it. Similar situations exist throughout the state. It is critically important that the state create a structure in which these local efforts are supported and empowered with the clear objective of stabilizing our groundwater resource. We need action from our lawmakers — now more than ever.