Posted on November 29, 2017 by Office of Public Affairs 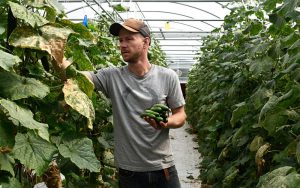 Farmers over the age of 65 now outnumber farmers under 35 by a margin of six to one, and U.S. farmland is overwhelmingly concentrated in the hands of older farmers. Nearly two-thirds of farmland is currently managed by someone over 55. The National Agricultural Statistics Service estimates that over the next five years—the lifespan of the next farm bill—nearly 100 million acres of U.S. farmland are expected to change ownership and will need a new farmer.

Fortunately, many young Americans are stepping up and launching new farm businesses. For only the second time in the last century, the 2012 Census of Agriculture registered an increase over the previous census in the number of farmers under 35 years old. These young farmers are entrepreneurial and tough, but they are finding that talent and hard work alone may not equate to farm success. There are many structural barriers standing in their way—and the stakes have never been higher.

Young farmers face serious obstacles to launching and growing their farm businesses: they can’t afford farmland; student debt is compromising their ability to capitalize their businesses; adequate labor and support staff are difficult to recruit; and health insurance is unaffordable. Federal and state policies are underserving these needs, and many young farmers are not accessing the programs designed to help.

The survey illustrated a challenging economic picture for young farmers. Sixty-one  percent of individual respondents reported needing another job to make ends meet, and fewer than half own all the acres they’re farming. Indicators tracked by USDA also suggest trends in the agricultural economy are hitting young farmers especially hard. According to Dr. Robert Johansson, USDA’s Chief Economist, young farmers and those who rent more of their land tend to be far more in debt relative to their assets.

The top challenges faced by young farmers are as follows: