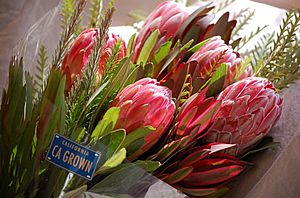 California’s floriculture crop leads the nation with a value of $1.13 billion in sales, according to a new report from the USDA’s National Agricultural Statistics Service (NASS). In 2013, California producers increased their sales from $1.10 billion to $1.13 billion, an increase of 3 percent, giving California 26.6 percent of the total U.S. wholesale value.

California cut flower production accounts for 78.2 percent of the total cut flower wholesale value. The $327 million value was down 2.7 percent from the 2012 value of $337 million.

California leads the nation in potted flowering plant values for 2013 with a total value of $297 million, a 17 percent increase in value from $253 million in 2012. California potted flowering production accounted for 38 percent of the 15-state wholesale value.