Posted on April 6, 2015 by Office of Public Affairs 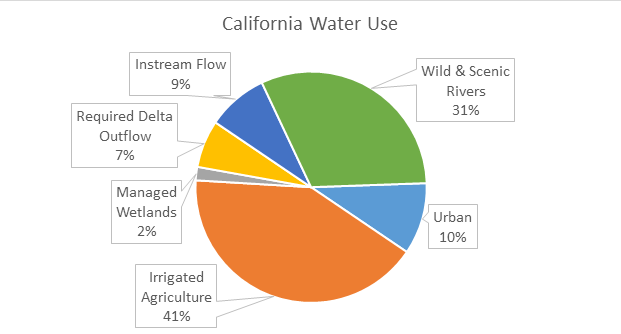 To irrigate more than nine million acres of crops, farmers use about 40 percent of California’s available water, compared with 10 percent used in cities. The remaining half is categorized as environmental water. Farmers have steadily improved productivity and shifted to crops like fruits, nuts, and vegetables that generate more revenue and profit per unit of water. Adjusted for inflation, the value of farm output has more than doubled since the late 1960s despite little change in acreage or irrigation water used. But California’s nonfarm sectors have grown faster, so agriculture is now less than 2 percent of the state economy. Because California dominates the national market for many fruits, nuts, and vegetables, prices of these crops can rise as irrigation water becomes scarcer. Water is a perennial concern.

Farm water use is changing

California farmers respond continually to changing market and technological opportunities. These adaptations have boosted earnings and raised the value of scarce farm water supplies. But they have also brought new challenges.

California farmers have shifted markedly to fruits, nuts, vegetables, and nursery crops, which made up roughly 47 percent of irrigated crop acreage, 38 percent of farm water use, and 86 percent of crop revenue in 2012. By comparison, forage crops, such as alfalfa and corn silage—inputs for the important dairy and cattle industries—generate less revenue per unit of water. In the water-limited San Joaquin Valley, orchards grew from 34 percent to 40 percent of irrigated cropland between 2000 and 2010. The rise in fruit and especially nut orchards—which must be watered every year—has reduced farmers’ ability to withstand intermittent water shortages.

Many irrigation districts have been upgrading delivery systems to provide more flexible service and minimize canal spills and seepage. Farmers have been switching from flood irrigation to drip and sprinkler systems, which improve crop yields and quality and reduce the application of harmful chemicals. However, in some regions—especially the San Joaquin Valley—these water management upgrades, including canal lining, have the unintended consequence of lowering groundwater levels. That is because irrigation water not consumed by crops is a major source of groundwater recharge.

San Joaquin Valley farmers have been pumping more groundwater to replace surface water previously shipped through the Sacramento–San Joaquin Delta or diverted from the San Joaquin River, as both sources have decreased to support endangered fish habitats. Groundwater is also being used to establish new orchards in previously unirrigated areas that lack surface water. High returns on orchard crops have made it profitable for farmers to invest in deeper wells, aggravating groundwater depletion. Groundwater quality is also falling in many areas, threatening crop yields and drinking water.

California needs to manage farm water for the long term

California will continue to be an agricultural leader, but it must continue to adapt and focus on sustainably managing both water quantity and quality.

The latest drought has exposed strengths and vulnerabilities

During the critically dry year of 2014, surface water deliveries to Central Valley farmers fell by a third, with reductions varying hugely depending on location. The drought caused hardship in some farm communities. About half a million acres were fallowed, some $2 billion was lost, and 17,000 full- and part-time jobs disappeared. But the economic losses would have been far greater if farmers had been unable to pump much more groundwater than usual or buy water from other farmers. (Groundwater pumping replaced roughly 75% of the lost surface water.)

Groundwater is California agriculture’s largest dry-year water reserve. But long-term declines in groundwater levels will limit its availability in many farming areas. The Sustainable Groundwater Management Act of 2014 authorizes local water users to create basin-level management agencies with the ability to monitor, manage, and charge for groundwater pumping and recharge. The legislation authorizes the state to step in if local water users fail to put in place sustainable management plans. Implementation— which can include increasing recharge and/or reducing pumping—will likely require the measurement of pumping and the allocation of pumping rights to groundwater users. In contrast, today’s rules generally allow landowners to pump without quantity restrictions.

Better integration of surface water and groundwater management is key

Many irrigation districts already manage surface and groundwater resources jointly to encourage groundwater basin replenishment in wet years. These local efforts need to increase. For instance, basins can be recharged with recycled wastewater from neighboring urban areas or by allowing floodwaters to spread on fields normally watered by drip irrigation. State actions also matter, given the importance of imported surface water in many regions. By shifting the timing of reservoir releases, agencies can increase the availability of surface water for underground storage. Investments in new storage and conveyance can increase system flexibility and boost water supplies.

California farmers have been active participants in the state’s water market for more than two decades. This market has supported productive farming areas that lack reliable supplies of their own, and it has helped to keep orchards alive during the latest drought. Markets also make water available for the environment and growing urban areas, while providing revenue to farmers who sell water. Localized trading of groundwater pumping rights can help basins implement the new groundwater law by allowing farmers who need more water for their orchards to compensate other farmers for reducing use.

Agricultural stewardship can do more to support the environment

Further improvements in the management of agricultural chemicals and drainage will reduce harmful discharges. Beneficial on-farm practices that provide habitat for California’s fish and wildlife—already common in some areas—also merit expansion. Programs may be warranted to compensate farmers for providing habitat services on these lands.

Farmers and irrigation districts are the frontline stewards of agriculture’s future, but the state and federal governments can provide technical, regulatory, and financial support to help California agriculture adapt to changing conditions.

Proposition 1 provides $100 million to help implement the new groundwater law. Additional legislation may be needed to support allocation of pumping rights. These rights should be tied to recharge sources. All landowners should share the recharge from natural precipitation, while irrigation districts should retain rights to water they bring into the basin. Local plans will also need to reduce pumping rights when farmers make efficiency upgrades to keep these investments from reducing long-term supplies.  Data on groundwater use and other key information about agricultural water management are still fragmented—and in some areas rudimentary. California also lags behind some other western states in using advanced technology, such as remote sensing, that can support or replace sometimes-costly on-the-ground data collection.

State and federal agencies have expedited water transfers during the latest drought. However, California would benefit greatly from clarifying the conditions under which water transfers can be carried out without causing harm to the environment or other water users, and from simplifying the approval process.

Proposition 1 will provide up to $2.7 billion to fund the public benefits of new surface and groundwater storage, including ecosystem, recreation, and flood protection improvements. Water tunnels beneath the Delta are another key infrastructure project under consideration. Tunnels would be expensive, but for some farmers and urban residents, the greater reliability and quality improvement of water supplies this project would bring may make it worth their money.

Proposition 1 and some federal programs can help fund safe drinking water for rural communities where groundwater is contaminated by nitrate from fertilizer and manure applied to fields. Many of these communities are also losing jobs as farm technology becomes more mechanized—for example, with nut and tomato crops. The state has provided emergency financial and food assistance to farmworker communities during the latest drought. Beyond that, the state should support workforce development to ease the long-term economic shift in farm communities.