Posted on January 13, 2016 by Office of Public Affairs 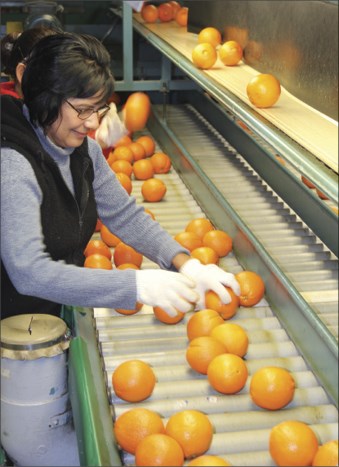 Citrus harvest is progressing between storms, the state’s growers and shippers say, a challenge not seen during the past four years of drought. But weather is only one factor, producers of the state’s signature fruit say.

“Overall, we’re about 25 percent picked, so we’re through the front end of harvest season,” said Kevin Severns, a Sanger citrus grower and general manager of Orange Cove-Sanger Citrus Association. He said he expects citrus harvest will continue into May.

“We got through the December cold spell pretty well, but there may be some damage to tangelo and mandarin varieties,” Severns said. “The bulk of the navel crop came through unscathed.”

If harvest delays stack up, the growers and shippers may get stuck with overripe fruit late in the season, he said, “but now quality is excellent. This is the third year the eating quality of California navels has been exceptional.”

“So far, so good,” Severns said. “There are still a lot of challenges that could happen between now and the end of harvest, but we’re bullish on this crop.”

Fresno County citrus farmer Greg Meyers said temperatures during the December cold spell weren’t much below 28 degrees where damage to the fruit starts to occur.

“When it did dip, our wind machines helped us out,” he said. “We were fine in our location.”

“We’re about to start harvesting tangelos and sweet mandarins,” Meyers said. “And we’re starting to prune our citron trees to get ready for next season. We’re the only citron grower in the U.S. and there’s a lot of demand for the fruit.”

As to rain, he said the weather outlook is “very encouraging, but it won’t be enough to recover from four years of drought. It will, however, go a long way toward providing growers with what they need to get through the coming crop year.”

Most packinghouses have planned for a wetter winter and as opportunities occur between storms, growers are moving enough fruit into processing plants to carry packing and shipping activities for a week or more at a time, said Bob Blakely, vice president of Exeter-based California Citrus Mutual.

“If we don’t get a break in the weather and can’t get back into the field to pick, then we could see some impact on supplies,” he told agricultural reporters.

If prolonged rains occur during coming weeks, that could cause problems with rind quality, “but we’re a long way from that becoming a problem,” Blakely said.

Another challenge, he said, is the threat posed by the Asian citrus psyllid, a non-native pest that can spread huanglongbing, a disease deadly to citrus plants. The California Department of Food and Agriculture said Dec. 28 that southern Stanislaus County has been placed under quarantine for ACP following detection of two psyllids within the city of Turlock.

The U.S. Environmental Protection Agency announced last week the first of four preliminary risk assessments for insecticides potentially harmful to bees, specifically neonicotinoids. In the assessment, the EPA said citrus “may” have residues of pesticides in pollen and nectar above a threshold level.

California Citrus Mutual President Joel Nelsen called the agency’s premise that neonicotinoids are a major contributor to the decline in bee populations or colony collapse false, noting the National Academy of Sciences finds there are several causes.

“Citrus does not require bees to produce a crop,” said Nelson. “But the citrus industry is in danger of being wiped out by the incurable disease huanglongbing that is spread by the Asian citrus psyllid, which can only be controlled by timely pesticide applications.

“We empathize with beekeepers dealing with colony collapse,” Nelsen said. “But neonicotinoids are a vital tool in the battle to save the citrus industry.”

He said CCM encourages EPA to continue regulating pesticides and other crop production tools based on sound, replicated science and “not to be swayed by unsubstantiated and emotional hyperbole.”

In the meantime, Severns, who is chairman of the CCM board of directors, said the U.S. market for California citrus is good for larger and medium fruit, “but smaller sizes are always a market challenge this time of year, with prices slipping considerably.

“We realize that seasons like this are a marathon and not a horse race,” he said.