Posted on February 22, 2016 by Office of Public Affairs 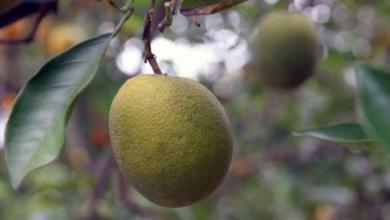 The USDA’s forecast Feb. 10 of 69 million boxes of oranges, weighing 90 pounds each, represents a decline of more than 71 percent since the peak of citrus production at 244 million boxes during the 1997-98 season.

Citrus greening disease (or huanglongbing or HLB) is largely the reason for the reduction in Florida citrus production.

“Today’s citrus crop forecast further illustrates that Florida’s citrus industry is on a precipice,” said Florida Commissioner of Agriculture Adam H. Putnam. “Florida is synonymous with citrus, and without immediate and tangible support, as well as a long-term solution, Florida is facing the prospect of losing its signature crop and its more than $10 billion economic impact.”

Putnam recently announced a multifaceted plan to provide Florida growers with more immediate support, including, among other things, a cost-sharing program for the removal or destruction of abandoned citrus groves to eliminate material that harbors citrus greening and the vector that spread the bacterial disease.

The same week of the USDA citrus report, University of Florida announced it received $6.7 million from the USDA to continue research to develop short and long-term solutions to the citrus greening problem.

“This funding is vital to expediting research in our search for a treatment for greening, which is threatening to destroy Florida’s $10.7 billion citrus industry,” said Jack Payne, UF senior vice president for agriculture and natural resources.  “We have a small army of researchers working day and night to save this industry, and our partnership with the federal government is aiding in this tremendous effort.”

Citrus greening was first detected in Florida in 2005. Florida has lost approximately $7.8 billion in revenue, 162,200 citrus acres and 7,513 jobs since 2007, according to researchers with UF/IFAS.

Although current methods to control the spread of citrus greening are limited to aggressive psyllid control and the removal and destruction of infected trees, UF/IFAS researchers are working to defeat it on a number of fronts, including trying to suppress the psyllid, breeding citrus rootstock that shows better greening tolerance and testing chemical treatments that could be used on trees.

Greening has also been detected in Georgia, Louisiana, South Carolina, and Texas and several residential trees in California. It has also been detected in Puerto Rico, the U.S. Virgin Islands, and 14 states in Mexico. A total of 15 U.S. states or territories are under full or partial quarantine due to the detected presence of the Asian citrus psyllid. Those states include Alabama, American Samoa, Arizona, California, Florida, Georgia, Guam, Hawaii, Louisiana, Mississippi, Northern Mariana Islands, Puerto Rico, South Carolina, Texas, and the U.S. Virgin Islands.

This entry was posted in Asian Citrus Psyllid, HLB, Uncategorized. Bookmark the permalink.

One Response to Florida citrus production off more than 70 percent; HLB to blame – from Southeast Farm Press