Bee theft in California on the rise – from the Guardian 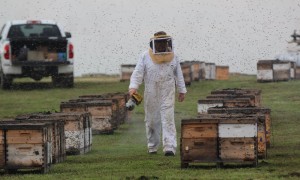 Photograph by Brett Murphy, the Guardian.

The bees crawled up the thief’s arms while he dragged their hive over a patch of grass and through a slit in the wire fence he had clipped minutes earlier. In the pitch dark, his face, which was not covered with a protective veil, hovered inches from the low hum of some 30,000 bees.

The thief squatted low and heaved the 30kg hive, about the size of a large office printer, up and on to the bed of his white GMC truck. He had been planning his crime for days. He knew bees – how to work them, how to move them, and most importantly, how to turn them into cash.

He ducked back through the fence to drag out a second box, “Johnson Apiaries” branded over the white paint. Then he went back for another. And another.

After the thief loaded the ninth hive, he sat behind the wheel, with the driver’s-side door open. The truck was far from full, and there were almost 100 more boxes behind the fence for him to choose from. That meant a lot of money. The exact value of a hive is not standard – it depends what you do with them – but nine hives can bring in about $5,000 in just one year. And they are worth considerably more in the hands of a capable beekeeper who can maintain them season after season.

Suddenly, a wall of white light hit the thief from behind. He froze.

A security guard stood next to his patrol car’s spotlight, keeping his distance. The guard, whose name was Dre Castano, inched forward, wary of being ambushed. He thought there was no way just one guy had got all of those big boxes into the truck on his own.

The thief climbed out of the car and turned into the light. He stood there alone, his eyes glazed over and sullen. Maybe a drunk driver, Castano thought. He asked for the man’s ID.

Pedro Villafan, 5ft 2in tall, and 46 years old. He lived 20 minutes south, in Newman, another little town at the base of the foothills. He looked flushed, half-asleep. But he kept calm and answered Castano’s questions. Yes, those were bees. No, they were not his. No, he did not work for Orin Johnson. Yes, he was stealing them.

These are strange times for the American beekeeper. In California, the centre of the industry, members of this tight-knit community find themselves enjoying an economic boom while trying to cope with environmental turmoil. And now they’re dealing with a new kind of criminal: the bee rustler. Every year, at the height of pollination season in the spring, dozens of nighttime thieves – nobody knows exactly how many – break into bee yards all over California to steal hives.

Farmers depend on bees, but they do not keep their own – it is too costly, too time-consuming and too painful. So, they lease their pollinators from the commercial beekeeping industry, a fast-growing, national trade that underpins American agriculture.

That Villafan was even caught is remarkable. Thieves in the Central Valley rarely end up in handcuffs, let alone face prosecution. Witnesses do not drive by often. At 42,000 square miles, the area is vast and isolated, yet still connected by freeway arteries – helpful to thieves looking to make a fast getaway. With the right equipment, know-how, and a buyer already lined up, stealing hives is easy. A truck full of bees boosted at midnight in Stanislaus can be unloaded in a Kern County orchard, 200 miles away, by the morning.

The state beekeepers association offers a reward for anyone who helps catch a thief. The security guard who accosted Villafan in January 2015 got $1,000, although the sum can be as high as $10,000.

Detective Rowdy Jay Freeman – a backyard beekeeper himself – drives out to meetings, conferences, bars and bee yards to meet the keepers. Hunting down bee thieves is a frustrating job, given the dearth of evidence. Where dozens or even hundreds of humming boxes sit one day, there are “nothing but tyre tracks in mud” the next, said Freeman. “There are no witnesses out there in the country.” In three years investigating rural crime, Freeman had not caught a single bee thief.

But that changed this year when he got a tip two counties south. Jacob Spath, a young beekeeper short on his contracts after a tough winter, had backed a flatbed truck into a bee yard and made off with 60 hives. Two days later, Spath was negotiating prices with a broker, when a friend of the victim spotted the boxes, recognised the name, and called the police. Freeman arrested him that week.

Now the district attorney is looking to make an example of Spath by charging him with grand animal theft, a felony that carries a much higher possible sentence than ordinary grand theft. Spath pleaded guilty in April and could serve three years in prison – possibly more, depending on the judge’s valuation of the bees. The specific penal code only mentions large animals, including horses, goats, cows, mules, sheep, hogs and boars. This will be the first time in the history of California that someone is charged with grand animal theft for stealing bees.