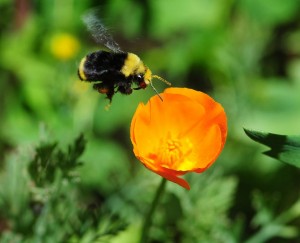 How do you weigh a bee? That’s the question that brought together insect specialists at the University of California, Davis, and two teams of UC Davis engineering students this year, to try and solve what turns out to be a tricky technical problem. But the consequences are important: ultimately, understanding how California’s native bumblebees respond to changes in the environment and the availability of flowers, and how we can protect these insects that are so vital to both agriculture and wild plants.

Neal Williams, associate professor of entomology who heads up the “bee side” of the project, called it a great example of interdisciplinary work.

“This is a great example of what should happen at a research university,” he said.

Williams’ team wants to understand everything about the life of a bumblebee colony, and especially how a colony reacts to change in the availability of pollen and nectar from flowers, their primary food source.

“Our goal is to understand how bees respond to the availability of resources in their habitat,” he said.

California’s wildflowers have disappeared as land has been converted for agriculture, creating “flower deserts.” Bees can respond to a short-term loss of resources by changing the demographics of the colony, for example producing more or fewer worker bees, or more reproductive males and females. What Williams and his team want to know is: what effect do those short-term changes have on bees’ ability to adapt to change in the future, and what does it mean for their long-term prospects?

To understand that, Williams and postdoctoral researcher Rosemary Malfi are collecting a lot of information about their bees. They photograph the adults when they emerge from the pupal stage, to count sterile workers and reproductive castes. A tiny RFID chip is glued to each insect’s back. Each hive is housed in a cooler, with one plastic tube leading in and out. An RFID reader records each individual bee entering or leaving the hive.

“We know how old they are, how big they are, what they are doing,” Williams said.

But to really know how each bee is doing, the entomologists want to know how much they weigh. That would tell them how well-nourished the bees are, and if they could make the measurement sensitive enough, they could measure how much pollen they bring back to the hive on every foraging trip.

So they were faced with a problem: How to weigh a tiny, jittery insect that will only stand on scale for fractions of a second. It was time to call in some engineers.

In spring quarter 2015, Williams visited an electrical engineering class taught by Andre Knoesen, professor in the Department of Electrical and Computer Engineering, to talk about his problem. Knoesen immediately saw it as a great senior-year project for engineering students.

Undergraduate engineers in their senior year usually undertake a team “capstone” project, which gives them an opportunity to apply their skills and knowledge. At UC Davis, those senior projects often draw in researchers from other areas of the university, for projects used in veterinary and human medicine, agriculture, wildlife biology and many other fields.

“Engineering is inherently multidisciplinary, but it is becoming increasingly important that our students be educated to effectively communicate with scientists and humanists to solve problems important for society,” Knoesen said.

The “bee scale” project ultimately gave rise to two team projects, one of electrical engineering students and the other, majoring in mechanical engineering.

“This project involved undergraduate students from multiple engineering disciplines collaborating with senior scientists to design and implement a device to be used in ongoing research — it was an exciting opportunity for our students and an example of multidisciplinary education that we can offer students here at UC Davis,” Knoesen said.

The electrical engineers had to solve the problem of taking the raw signal from the scale and obtaining time-stamped data for individual bees. 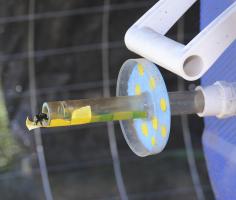 A bumblebee leaving an experimental colony housed in a cooler. The “bee scale” to weigh the insects has to be placed in this tunnel. Photo: Kathy Keatley Garvey

“We were working with very small signals, at the low end of the technology, so noise in the data was an issue,” Troxell said. A bumblebee weighs between 150 and 200 milligrams, and to get useful information about bee health or how much pollen they are carrying, the scale would need to be accurate to less than one milligram. A conventional laboratory balance averages several readings over a few seconds — but bees are much too fast and jittery for that to work.

Their measurements were so tiny that bee footsteps could throw them off.

“We had to ask the entomologists about the speed of bee footsteps so we could negate the noise in the data,” Troxell said.

Learning to work in teams

“It was a very interesting challenge,” she said. “As mechanical engineers we’re used to a very methodical approach, but this is as much about working with people as it is about mechanics.”

Williams said he’s excited with the progress so far. The teams have been able to get readings to within tens of milligrams. Some of the students may continue the work over the summer, and Williams said that it might become a graduate student project.

“What’s been fantastic has been the integration between the teams,” Williams said. “This is the way a design process should work.”

This entry was posted in Alternative Fuels. Bookmark the permalink.