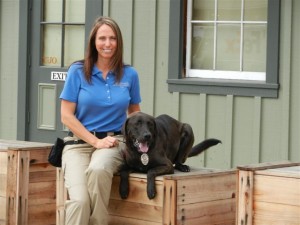 Dozer with his handler, Jennifer Berger

Dozer the detector dog has reported for duty!  He brings our total to 13 dogs throughout the state that spend their working hours sniffing around package-delivery facilities, detecting parcels that contain fruits, vegetables, plants and other agricultural materials.  These dogs protect California’s citizens and its agriculture from harmful pests, diseases and weeds that could otherwise sneak into our state and cause dangerous and expensive infestations and outbreaks.

Dozer, a three-year-old Labrador retriever mix, came to us from Atlanta Lab Rescue.  All of the dogs in the California Agriculture Detector Dog Program are rescued dogs. Dozer arrived in California earlier this month to begin his assignment with his handler, Jennifer Berger with the Sacramento County Agricultural Commissioner’s Office.  He works at various shipping facilities in the Sacramento Valley area.  Jennifer reports that Dozer is a remarkably strong and determined dog who loves to chew on a big Nylabone as they ride to work.  When he’s off the clock, he likes to tug on his “Kong Wubba” toy and fetch a ball.

Since the program began in 2006, the dog teams have intercepted thousands of mislabeled or otherwise illegal packages, including shipments containing more than 360 actionable insect and weed pests. A few of their significant interceptions are:

One Response to California Welcomes Dozer, Our Newest Detector Dog