Posted on September 27, 2016 by Office of Public Affairs 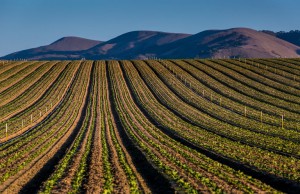 There is much to like about small, local farms and their influence on what we eat. But if we are to sustainably deal with problems presented by population growth and climate change, we need to look to the farmers who grow a majority of the country’s food and fiber.

Large farmers — who are responsible for 80 percent of the food sales in the United States, though they make up fewer than 8 percent of all farms, according to 2012 data from the Department of Agriculture — are among the most progressive, technologically savvy growers on the planet. Their technology has helped make them far gentler on the environment than at any time in history. And a new wave of innovation makes them more sustainable still.

A vast majority of the farms are family­ owned. Very few, about 3 percent, are run by non-family corporations. Large farm owners (about 159,000) number fewer than the residents of a medium­-size city like Springfield, Mo. Their wares, from milk, lettuce and beef to soy, are unlikely to be highlighted on the menus of farm-­to-table restaurants, but they fill the shelves at your local grocery store.

There are legitimate fears about soil erosion, manure lagoons, animal welfare and nitrogen runoff at large farms — but it’s not just environmental groups that worry. Farmers are also concerned about fertilizer use and soil runoff. That’s one reason they’re turning to high-­tech solutions like precision agriculture. Using location-­specific information about soil nutrients, moisture and productivity of the previous year, new tools, known as “variable rate applicators,” can put fertilizer only on those areas of the field that need it (which may reduce nitrogen runoff into waterways). GPS signals drive many of today’s tractors, and new planters are allowing farmers to distribute seed varieties to diverse spots of a field to produce more food from each unit of land. They also modulate the amount and type of seed on each part of a field — in some places, leaving none at all.

Many food shoppers have difficulty comprehending the scale and complexity facing modern farmers, especially those who compete in a global marketplace. For example, the median lettuce field is managed by a farmer who has 1,373 football fields of that plant to oversee. For tomatoes, the figure is 620 football fields; for wheat, 688 football fields; for corn, 453 football fields. How are farmers able to manage growing crops on this daunting scale? Decades ago, they dreamed about tools to make their jobs easier, more efficient and better for the land: soil sensors to measure water content, drones, satellite images, alternative management techniques like low­ and no­till farming, efficient irrigation and mechanical harvesters.

Today, that technology is a regular part of operations at large farms.   Farmers watch the evolution of crop prices and track thunderstorms on their smartphones. They use livestock waste to create electricity using anaerobic digesters, which convert manure to methane. Drones monitor crop yields, insect infestations and the location and health of cattle. Innovators are moving high­-value crops indoors to better control water use and pests. Before “factory farming” became a pejorative, agricultural scholars of the mid­ 20th century were calling for farmers to do just that — become more factory-like and business-like. From that time, farm sizes have risen significantly. It is precisely this large size that is often criticized today in the belief that large farms put profit ahead of soil and animal health. But increased size has advantages, especially better opportunities to invest in new technologies and to benefit from economies of scale. Buying a $400,000 combine that gives farmers detailed information on the variations in crop yield in different parts of the field would never pay on just five acres of land; at 5,000 acres, it is a different story.

These technologies reduce the use of water and fertilizer and harm to the environment. Modern seed varieties, some of which were brought about by biotechnology, have allowed farmers to convert to low­ and no-­till cropping systems, and can encourage the adoption of nitrogen­fixing cover crops such as clover or alfalfa to promote soil health. Herbicide­-resistant crops let farmers control weeds without plowing, and the same technology allows growers to kill off cover crops if they interfere with the planting of cash crops. The herbicide­-resistant crops have some downsides: They can lead to farmers’ using more herbicide (though the type of herbicide is important, and the new crops have often led to the use of safer, less toxic ones). But in most cases, it’s a trade­off worth making, because they enable no­-till farming methods, which help prevent soil erosion. These practices are one reason soil erosion has declined more than 40 percent since the 1980s.

Improvements in agricultural technologies and production practices have significantly lowered the use of energy and water, and greenhouse ­gas emissions of food production per unit of output over time. United States crop production now is twice what it was in 1970. That would not be a good change if more land, water, pesticides and labor were being used. But that is not what happened: Agriculture is using nearly half the labor and 16 percent less land than it did in 1970. Instead, farmers increased production through innovation. Wheat breeders, for example, using traditional techniques assisted by the latest genetic tools and information, have created varieties that resist disease without numerous applications of insecticides and fungicides. Nearly all corn and soybean farmers practice crop rotation, giving soil a chance to recover.

Research is moving beyond simple measures of nitrogen and phosphorus content to look at the microbes in the soil. New industry-wide initiatives are focused on quantifying and measuring soil health. The goal is to provide measurements of factors affecting the long­term value of the soil and to identify which practices — organic, conventional or otherwise — will ensure that farmers can responsibly produce plenty of food for our grandchildren.

This entry was posted in Climate Change, Environment, Uncategorized. Bookmark the permalink.