Can solar art save California from drought? From USA Today

Posted on October 10, 2016 by Office of Public Affairs 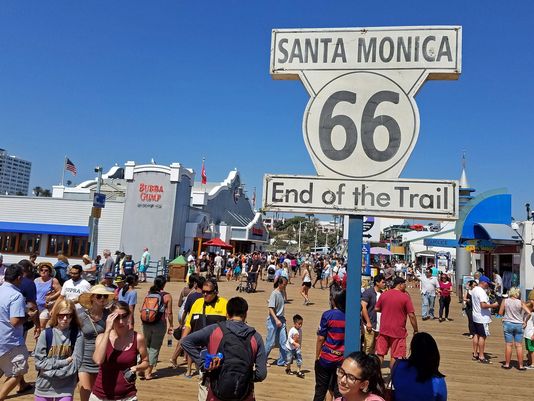 California’s Santa Monica is home to more than three miles of beaches and fresh breeze from the Pacific, and is one of National Geographic’s top 10 beach cities in the world. Santa Monica Beach boasts more than 300 days of sunshine a year, but it has a striking shortage of a critical resource: drinking water.

Now in its fifth year of drought, California has made water conservation a state policy and priority, and its governor is issuing executive orders to continue saving water, with droughts expected to be more frequent and persistent due to climate change.

This drought-stricken area is hosting this year the biennial Land Art Generator Initiative, where engineers and designers submit projects for large-scale art installation projects for the Santa Monica Pier that would generate clean energy and/or drinking water. Winning submissions will be announced in October, with the first-place submission getting US$15,000 and the second-placed project receiving US$4,000.

Winning the contest does not necessarily mean the awarded installation will be built, and the project would require more than just the prize money to complete and implement. It would likely require years of designing, construction, permits, and state and local county collaboration and regulation.

One short-listed submission aims to make sea water drinkable, called The Pipe. The Pipe is a 2,000-foot-long floating tube covered with solar panels that would have annual capacity of 10,000 MWh that would generate 4.5 billion liters of drinking water. That’s some 40% of the average daily usage of Santa Monica residents, according to Business Insider.

That’s also more than the amount of water that Santa Monica is importing to meet demand.

The Pipe proposes to use solar-generated energy to pump seawater and filtrate it via an electromagnetic field that removes the salt. The floating device is also planned to welcome tourists on board, and ticket sales could be used to pay for the construction.

That said, ticket sales would hardly suffice to pay for this technology of electromagnetic desalination, which its inventor, Canada-based electrical engineer Aziz Khalili, has already filed for patent. Electromagnetic forces in desalination would need less electricity and at the same time, create less waste and less water pollution than conventional desalination, Khalili told Business Insider.

Another short-listed finalist is The Clear Orb project, which proposes to use transparent luminescent solar concentrators and a wave energy converter for solar distillation. Annual capacity is planned at 3,820 MWh and 1.9 million liters of drinking water. Compared to The Pipe, The Clear Orb is smaller in its ambitions to help provide drinking water in Santa Monica.

All projects are ambitious and help to raise awareness about California’s drought. They all plan to blend art with renewable energy to the benefit of the environment and the people.

Santa Monica is on track to achieve the state regulation target to reduce its water consumption by 20% from its 2013 baseline usage, but Santa Monica still imports 30% of its water sources to meet demand, although it has planned measures to eliminate the need to import water by 2020.

Regarding art-meets-clean-energy projects, from a primary-resource point of view, Santa Monica’s sun, waves and seawater are abundant and will not be depleted any time soon. The question is, will technology, project feasibility and costs be sustainable enough to allow the art-solar-tech installation see the light of day.