Posted on December 27, 2016 by Office of Public Affairs 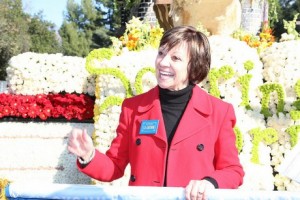 As part of the upcoming Rose Parade festivities, CDFA Secretary Karen Ross will once again join the Buy California Marketing Agreement (BCMA) and the California Cut Flower Commission (CCFC) on December 31 to recognize Cal Poly campuses at San Luis Obispo and Pomona as well as FTD Inc. for their commitment to California’s flower farmers. Secretary Ross will also bestow a certification of “California Grown” on Rose Parade floats.

“I’m excited to once again be honoring our Cal Poly students for their hard work and commitment to building a California Grown Certified float for this year’s Tournament of Roses Parade,” said Secretary Ross. “And it’s great to have FTD join in this important effort this year by decorating the VIP entries, including the parade’s Grand Marshal vehicle, with California Grown flowers.”

The California Grown Certification recognizes parade floats and VIP vehicles built with a minimum of 85 percent of cut flowers and greens from the Golden State.

The float to be certified from Cal Poly is called ‘Soaring Stories.’

“We are proud to be certified California Grown again this year,” said Cal Poly San Luis Obispo President Jeff Armstrong. “Our universities are dedicated to educating the next generation of farmers and ranchers in California, so it’s only natural that we are committed to supporting the hard-working flower farmers in California today, many of whom are alumni.”

The California flower industry has a $12.2 billion annual impact on the state’s economy. California’s flower farmers represent over 4,500 jobs and contribute $1.7 million to California’s economy every day.