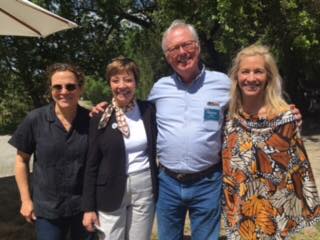 CDFA Secretary Karen Ross (second from left) at Iron Horse Vineyards in Sebastopol for an Earth Day celebration on Sunday, April 23. Others in the photo, from left, are chef Traci Des Jardins, Stacey Sullivan of Sustainable Conservation, and Joy Sterling, CEO of Iron Horse and a member of the California State Board of Food and Agriculture.

That was the Earth Day message California Secretary of Agriculture Karen Ross brought to the sun-drenched Sonoma countryside Sunday.

Speaking at a private event on a hillside at Sebastopol’s Iron Horse Vineyards, Ross praised CEO Joy Sterling and her family for stewardship of their 300-acre property in the prized Green Valley appellation.

“We recognize that conserving our farmland, conserving our natural working landscapes and managing them in a way that stores carbon is the solution,” Ross said.

Sterling’s family has close ties to Gov. Jerry Brown’s administration, and she sits on the state’s Food and Agricultural Board.

Ross touted Brown’s environmental leadership, including his call for the state to reduce its greenhouse gas emissions by 80 percent by 2050, as well as the sustainability efforts of the wine industry, which she knows well from her 13 years heading the California Association of Winegrape Growers.

Ross reminded the assembled wine lovers that as consumers, they hold the power to ensure the climate accord struck in Paris last year — which many feel is now imperiled by the Trump administration — is ultimately successful.

“It was businesses and individuals and nonprofits that came together, which tells you no matter what the policies are in Washington, D.C., the market and the people at the grass roots are not going to allow it to change,” Ross said.

Ross noted that the state’s 77,600 farmers need the support of its 40 million residents if they are going to be successful in adapting to climate change.

“We need a partnership to support our farmers in the changes that they embody, and this farm is a perfect example,” Ross said.

“This region is a perfect example.”

Sterling cited just a few of the sustainability efforts the property has taken over the years, noting that state biologists released 8.400 juvenile coho into Green Valley Creek last month from the property.

She also noted the irony that while the menu for the event included veggie burgers, the property on which it was held was a 1920s cattle corral.

“That’s exactly how change happens — you repurpose things, and you rethink about them,” Sterling said.

In a nod to the importance of preventing food waste, Komal Ahmad, CEO of food-sharing app Copia, explained how her organization began as a way to get perfectly fine food that was going to waste at UC Berkeley into the hands of the homeless and is now on track to feed 1 million people this year.

“We really want to solve what we believe is the world’s dumbest problem,” Ahmad said of food waste.

Money from Sunday’s event will support the San Francisco-based nonprofit Sustainable Conservation, which works with businesses to promote an array of environmental initiatives, including waste-to-energy projects and habitat restoration.

“Farmers are at the interface of human society and the natural world, and they are there every day,” said Stacey Sullivan, policy director of Sustainable Conservation. “Who better to celebrate Earth Day with?”