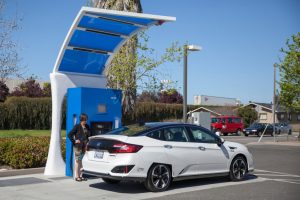 A hydrogen refueling station in Hayward.
Photo from the New York Times

Note – The California Department of Food and Agriculture’s Division of Measurement Standards plays an important role in the ongoing development of hydrogen fueling stations by certifying hydrogen fuel meters and regulating fuel quality, advertising and labeling in the marketplace. For more please see the video at the end of this story.

The daily commute is a real grind for most people, but not for Heather McLaughlin.

In February, Ms. McLaughlin leased a 2017 Honda Clarity FC, a sedan powered by hydrogen fuel cells and available only in California. And it has transformed her daily 20-mile commute near San Francisco.

With no pistons or spark plugs, the car is serenely quiet. Its electric motor provides a peppy ride. And wherever Ms. McLaughlin goes, the only thing that comes out of the tailpipe is a bit of water vapor. There are no pollutants, no greenhouse gases.

“On cold mornings you can actually see drops of water — it’s so cool,” Ms. McLaughlin said recently. “Driving to work is usually the best part of my day.”

Right now, a morning ride in a hydrogen-powered car is possible only in California. But in the coming months, environmentally minded consumers on the East Coast will have the opportunity to join in.

Automakers and environmentalists have long hailed fuel cells as a revolutionary technology that can reduce planet-warming tailpipe emissions, which account for a significant portion of the greenhouse gases released in the United States. After years of development, several models are now on the road, like the Toyota Mirai and the Honda Clarity FC.

The next challenge is building networks of hydrogen stations so owners can refuel their cars.

So far California has 30, enough to enable owners to drive throughout the state without worry of running out of hydrogen, and it intends to expand that to 100 by 2020. Sales of fuel-cell vehicles have been limited to the state so far.

The automakers are poised, however, to expand into the Northeast. Air Liquide, a producer of industrial gases, is working with Toyota to set up a chain of 12 hydrogen fueling stations stretching from New York to Boston; the first is expected to go into operation later this year. Locations will include the Bronx; Brooklyn; Hempstead, N.Y., on Long Island; Lodi, N.J.; Hartford; and Braintree and Mansfield, Mass.

The availability of hydrogen fuel will pave the way for the start of East Coast sales.

The Northeast is “the next critical step toward a much wider distribution of fuel-cell vehicles,” said Craig Scott, director of Toyota’s advanced technology group. The densely populated Northeastern states “in some sense could rival California as a market,” he said, adding, “As a region, they have very good sales potential.”

In March, Hyundai previewed a new fuel-cell sport utility vehicle that it plans to introduce next year.

Steve Center, Honda’s vice president for environmental business development, said oil companies and others were also showing interest in adding hydrogen fueling stations on the East Coast. “What we want to see is clusters of fueling stations in the cities, and then connectors in corridors between the big cities so you have fueling between Boston, New York, Washington,” he said.

California has had an advantage because it is a large state with a government committed to supporting zero-emissions technologies. “In the Northeast, you have different states under different leadership, so it’s a little tougher to get a unifying plan,” Mr. Center said.

The automakers say they plan to continue to push ahead with fuel-cell technology even if the Trump administration pulls back federal support for advanced-technology cars. The companies believe that they will be required, within a decade or two, to produce large numbers of cars and trucks that release nothing into the atmosphere in most markets around the world.

Fuel cells operate by setting off a chemical reaction between hydrogen and oxygen. The two elements bond, creating an electric charge. Stack a few hundred cells together, and they can generate enough electricity to power a car motor.

Hydrogen fuel-cell vehicles, if they take off, could offer advantages over the battery-powered cars on the road now, like the Tesla Model S and the Nissan Leaf. Electric vehicles need to be recharged, sometimes for a few hours, when their batteries run down. While the Chevrolet Bolt is said to go 238 miles before needing to recharge, others are more limited.

A version of the Clarity powered by batteries goes just 80 miles on a single charge. By comparison, the Clarity FC — the fuel-cell version — can go 366 miles on a full tank.

The Clarity FC is a four-door sedan and is the same size as a Honda Accord, but it features more futuristic touches including slitlike headlamps, a sloping roofline and angular taillamps. It was designed from the ground up for an electric powertrain, which enabled Honda to create more interior space while fitting in two nearly indestructible hydrogen tanks.

Refueling the Clarity and the Mirai is virtually the same process as filling a car with gasoline. In California, owners pull up to what looks like a normal fuel pump. The fueling hose clicks into the car’s intake port, and hydrogen gas is forced into the tanks. It all takes three to five minutes.

Most of the hydrogen pumps in California are at existing gas stations. The state recently provided $32 million in grants to fund the construction of 15 additional fueling stations.

So far, Toyota is in the lead in sales, having sold about 1,400 Mirais. The company expects sales to exceed 3,000 by year’s end. Honda started selling the Clarity this year and has delivered about 100. Hyundai has also leased a small number of fuel-cell versions of its Tucson S.U.V. in Southern California.

In a bid to cut the cost of fuel-cell systems, G.M. and Honda are setting up a plant in Michigan to mass-produce fuel-cell systems that both companies will use in future hydrogen-powered vehicles. The companies hope that by pooling their resources they can quickly increase production and lower costs.

For now, subsidies are offered to make fuel-cell vehicles more affordable. Both the Clarity FC and the Mirai have list prices of about $58,000, although almost all customers lease the vehicles. The federal government gives a $7,500 tax credit on zero-emissions vehicles, and the state of California offers a $5,000 grant on top of that.

The Trump administration has not yet made clear if it plans to scrap the federal tax credit. If it does, that could severely crimp sales of high-mileage cars like electric vehicles.

The automakers add incentives of their own, too. Toyota and Honda give their customers credit cards for up to $15,000 of fuel over the first three years of ownership. Hydrogen fuel is still significantly more expensive than gasoline. Filling a tank costs about $75.

In addition, both Toyota and Honda provide a rental car for up to three weeks a year, in case a customer needs to go on a long trip out of range of hydrogen fueling stations and their Mirai or Clarity FC has to stay home.

Ms. McLaughlin, the Clarity FC owner in California, says she pays $369 a month to lease her car — a great deal in her view, given the benefits Honda is providing.

“I love never paying for fuel, and I probably will take advantage of the rental car coverage at some point,” she said. “I almost feel like they are paying me to own the car.”