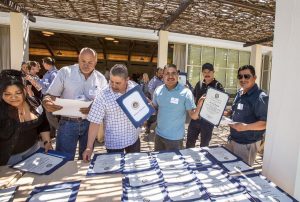 Recent literacy program graduates are honored with certificates of their achievement.

A decade ago, Silvia Ortiz was unemployed and desperate for work. But with scant grasp of English and unable to speak it, she remembers having to ask her then 6-year-old son: “How can I tell the winemaker that I am looking for a job?”

Recounting her plight on Thursday before more than 100 grape growers, farmworkers and donors at the Napa Valley Farmworker Foundation’s yearly appreciation luncheon, Ortiz spoke in English of her frustration after landing a job with Lewis Cellars and having to show interns during her second harvest how tasks were done instead of telling them, as her English still lagged.

That frustration held, “Until one day Josh (Widaman), the winemaker, asked me if I wanted to attend one of the English classes,” she said.

Offered through the Farmworker Foundation’s English Literacy Program, the classes began in 2013. In April, the program graduated 70 students, its latest and largest class. Ortiz, now in her 10th year at Lewis Cellars, was among them.

The literacy program and pruning contest are among the efforts of the Farmworker Foundation and the Napa Valley Grapegrowers, which the foundation sprang from in 2011. Other programs include a two-week intensive math course, various workshops, leadership training and a series on “Navigating the American School System”.

The foundation’s origins can be traced to chairman Arnulfo Solorio’s “dream and wish for education for all farmworkers in the Napa Valley.”

Speaking Thursday, Solorio thanked donors and queried other employers: “Who does not want to hire a well-trained employee who speaks English, knows how to calibrate a tractor or sprayer, knows general viticulture and has potential to be a great leader?”

To date, Solorio said, the group has provided more than 1,300 hours of training and benefited more than 12,000 farmworkers and their families.

“The Napa Valley is well-known and famous for its 100-point wines, and part of this dream is to make 100-point farmworkers,” he said.

“We are being given this big opportunity and we shouldn’t be thinking twice about it,” Ortiz said in her remarks. “We have to take advantage of this opportunity because every time someone asks us why we come to the United States, we say because we want a better life for our family. If we continue with our education, our kids will want to follow our steps.”

This entry was posted in Agricultural Education. Bookmark the permalink.