Watch plants during eclipse – From the Clemson Newsstand 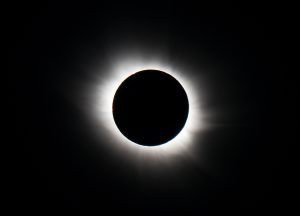 CLEMSON — Clemson University researchers say the public can help collect scientific information about the effect of Monday’s eclipse on plants for future generations.

This will be the first time since 1918 a total eclipse will cross the entire United States. Douglas Bielenberg, a Clemson plant physiologist, said because total solar eclipses are so rare, not many biological observations have been made on what takes place during totality.

“There is very little organized information related to what happens to plants, during a total solar eclipse,” Bielenberg said. “This will be a great opportunity for people to make and record observations.”

Because most of the obvious visible action will be taking place in the skies, Bielenberg said people will tend to “look up and not down.” But just as much action could be taking place on the ground as in the skies. Plant circadian rhythms could be affected and plants could attempt to get in their night positions even though night is still some hours away.

“People who have gardens can look for the leaves on the plants to droop, or get in their night positions,” Bielenberg said. “Because we don’t have much information from previous solar eclipses and because this solar eclipse will happen so quickly, we don’t know if plants will be affected. It will be great if people can check to see if their plants act as it was night.”

People can look for leaves folding or flowers that usually just open at night opening during the day. Some common plants that may show movements induced by the eclipse include legumes and Albizia (silk tree).

Bielenberg advises people to observe their plants for a few evenings before the eclipse so that they will know what changes to look for during the eclipse.

Then they can upload photos they take of their plants during the eclipse to the NASA Flickr page at https://www.flickr.com/groups/nasa-eclipse2017/.

Bielenberg said they can have a little fun by using the leaf canopy of trees as natural pinhole cameras. People observing the eclipse from sites with tree cover can look at the shadows of leaves on the ground. During the partial solar eclipse, tiny spaces between the leaves will act as pinhole projectors, dappling the ground with images of the crescent sun.

During the eclipse, Clemson horticulturist Bob Polomski will be studying the effect of the phenomenon on indoor and outdoor plants.

“In response to darkness, the leaves of a prayer plant (Maranta leuconeura) move from a horizontal position to a vertical position, similar to a pair of praying hands,” Polomski said. “Shamrock leaves (Oxalis) assume a horizontal position in sunlight and droop down during the night. Other plants are triggered to open their flowers in the evening to release fragrances that attract night-flying pollinators, such as moths. It will be interesting to see if these events occur during the day as the solar eclipse occurs.”

Polomski will try to observe whether the remontant or repeat-flowering Southern magnolias such as Little Gem and Kay Parris will close prematurely during the reduced sunlight of the eclipse. Southern magnolia flowers typically open around 9 a.m. and close by night. A few plants that bloom at night and could be watched for changes during the eclipse are flowering tobacco (Nicotiana alata), moonflower vine (Ipomoea alba), angel’s trumpet (Datura inoxia), night phlox (Zaluzianskya capensis), four-o’clocks (Mirabilis jalapa) and tuberose (Polianthes tuberosa).

Experts advise anyone who plans to shoot pictures in order to document plant or animal behavior during the eclipse to not look directly at the sun through an unfiltered camera, telescope, binoculars or other optical device. In addition, these experts say do not look at the sun through a camera, a telescope, binoculars, or any other optical device while using eclipse glasses or hand-held solar viewers — the concentrated solar rays will damage the filter and enter a person’s eyes, causing serious injury. Read Eclipse 101 safety information by NASA for more tips on how to safely view the 2017 solar eclipse.