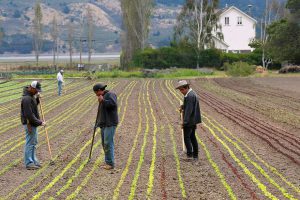 Advocates of Bay Area agriculture and organics have been waiting to learn the fate of Star Route Farms since owner Warren Weber put his 100-acre Bolinas farm up for sale in 2013.

When news broke this month that the University of San Francisco has purchased the property that was the state’s first certified organic farm, many responded with enthusiasm. “It’s a symbol of the importance of farming and of farmland conservation,” said Jamison Watts, director of the Marin Agricultural Land Trust. Not only is the land going to remain a working organic farm, but the university plans to use it to educate students.

Yet if the sale is an omen of the future of farming in the Bay Area — and organic agriculture in particular — it’s a hard one to read. The unconventional nature of the deal, rather than the institutional buyer that purchased the land, may signal a future that Bay Area food lovers can look toward.

The 76-year-old Weber’s desire to sell the farm he founded in 1974 is a bellwether for an entire generation that has reached retirement age. According to the most recent U.S. Department of Agriculture census of agriculture, the average age of farmers in California in 2012 was 60. Almost a quarter were over 70. Only 4 percent were under age 34.

The Farm LASTS Project, which studies succession planning for farmers, has estimated that in the next 20 years, 70 percent of all privately owned farms and ranches in the United States will change hands. Although organic farmers are younger on average than conventional ones, California Certified Organic Farmers, the primary certification agency in the state, recently found that 200 of the 2,500 farms on its rolls had been certified organic for more than 20 years.

Many aging farmers must sell their farms to fund their retirement. Yet it’s not as simple as putting a home or business on the market and decamping to Arizona. “It’s selling your life’s work,” said Liya Schwartzman, who works on California FarmLink’s Agrarian Elders Project. “The hope is that in the transition you’re finding someone who will preserve the legacy of the farmland and also the farm business.”

Dennis Dierks of Paradise Valley Produce has been farming in Bolinas as long as Weber has. He and his wife had no intention of moving off their property, which they purchased in 1972 as part of a cooperative, but their three oldest children weren’t interested in the long workdays and strenuous labor. “I’ve been trying to find someone to train, but it was difficult,” he said. Then, last season, his youngest daughter and her husband announced that they wanted in. “That was a major relief for me.”

Schwartzman cautions that even family succession is tricky. Siblings who want their inheritance in cash come up against those who want to keep the farm. Older and younger generations may have different visions for the future.

For an organic farmer, passing the farm on also means looking for stewards who will profit from the 30 to 40 years he or she has spent building the soil, as well as relationships with farmers’ markets, restaurants and customers.

It’s a legacy that many beginning organic farmers would love to take on, particularly in the Bay Area, where farmers receive so much respect for their work and their food. Yet few can.

“The price of land is a huge obstacle,” said filmmaker Deborah Koons Garcia, whose documentary “Agrarian Elders” about Weber and other organic pioneers will be released in 2018. “When they sell, farmers want to be able to retire, but the people coming in, no matter how young and enthusiastic — that’s a lot of money to come up with.”

There’s little surprise that it took four years for Weber, who initially listed the property for $12.5 million, to find a buyer. The final sale price of $10.4 million is too steep for most beginning farmers, and such a mortgage would make it hard to succeed financially afterward. Someone rich might have bought the land, but individual wealth wouldn’t guarantee that the buyer would continue to farm.

A university seems like the ideal, and deep-pocketed, successor. Yet there aren’t nearly enough institutions in California to do the same for every retiring farmer.

If Bay Area urban dwellers want to preserve the green space around them, not to mention the area’s rich agricultural history and easy access to local food, they can’t just expect individual farmers to shoulder the burden. Systemic solutions are needed.

The Greenbelt Alliance estimates that 217,000 acres of farm and ranch land in the greater Bay Area have been lost to development in the past three decades, and that another 200,000 acres are “at risk.”

Schwartzman said younger farmers are also forming partnerships to buy land, or joining with cooperatives and nonprofits. “I don’t want to put a shadow on people’s visions for being able to afford farmland,” she said. “It is possible. But we have to get creative.”