Posted on October 19, 2017 by Office of Public Affairs 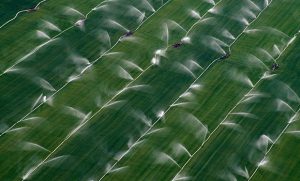 Note – California and all of American agriculture are seeking young people to enter farming-related fields, and not just on the farm – there are an estimated 300 positions in food production, many of them requiring increasingly sophisticated technical skills.

Technology has changed the way farmers irrigate their crops in the Central Valley, a region that produces a quarter of the nation’s food. One local community college is responding by teaching students how to design and create irrigation systems, while filling a gap in the local industry’s workforce.

Modesto Junior College’s Irrigation Technology program is the first of its kind in the state. It offers both an Associate of Science (A.S.) degree and an Irrigation Technology certificate providing students the opportunity to learn the skills they need to work in agriculture water management.

“The population continues to increase as does the water needs for the state of California and the nation,” said Steve Amador, the program’s faculty advisor. “The water resources that we have now are continually being taxed more and more, so there’s really a lot of interest in conserving water and doing things the right way.”

The Irrigation Technology program started as the demand increased for the one irrigation class offered to MJC science students. “So we decided to start an irrigation degree, an A.S. degree,” added Amador. “We decided to build some facilities, look for some money for student travel and really just expand and promote the program.”

The program is funded by a Strong Workforce Program regional investment administered through the California Community College Chancellor’s Office and a three-year grant from the National Science Foundation.

The first graduates completed the program earlier this year. “I was proud that we had 24 who were irrigation majors,” said Amador. “Some of them finished and received degrees and some of them have a few more classes to take. We were at 95 percent full-time employment or summer internships in the irrigation field.”

One of those graduates is Ryan Lehikainen. “I was going to school for ag business. Irrigation has always been an issue in California, so I took a class to get some knowledge of irrigation. It sparked my interest. The program that Mr. Amador has at MJC really caught my eye and I decided spend another semester at MJC to get that degree.” Lehikainen, a Modesto native, was brought on as an intern at the Central Irrigation Company and after graduation, was hired as a full-time irrigation designer.

“The systems we design are designed to meet the evapotranspiration (the combination of evaporation and transpiration from plant material) rates of the plant. So each plant has a different water requirement that makes sense,” explained Lehikainen. “An almond tree each day during the summer requires .28 inches of water a day to sustain healthy growth and a healthy nut. So the system we design is designed to give exactly .28 inches of water to that tree in a specific area.”

Central Irrigation Company’s owner Keith Yamamoto explained the importance of MJC’s program. “There’s a huge need in the middle for someone who is technologically savvy, who has an understanding for engineering, but didn’t have the means or desire to go on to a large four-year university.”

Irrigation designers use software such as AutoCAD and don’t necessarily need an engineering degree. “What’s also important is you have to have some common sense – how things work, and also understand ag and the area. It’s very important that you can relate what you learn and apply it to the field,” said Yamamoto.

MJC’s program not only offers the A.S. degree, but also provides a way for current irrigation technicians to increase their worth with their current employers. According to Amador, “I have several students who work for irrigation companies and come in and take a couple of classes, get a certificate and go back to get a raise or more responsibility at work, whatever the case may be.”

Programs such as MJC’s Irrigation Technology Program fills a workforce gap in an industry that it vital to the country’s food supply.

After playing a role in the creation of the $200-million Strong Workforce Program, the Summit has helped to support the program’s implementation, highlighting programs successfully engaging and maintaining relationships with employers.

Expanding and improving these types of workforce programs through the California Community Colleges will be one of the topics at the California Economic Summit, which will be held in San Diego on November 2-3.

The Summit will also drive a broad effort to strengthen rural communities through infrastructure and job creation programs in regions which have struggled with higher rates of poverty, higher concentrations of minimum wage workers, and lower broadband connectivity than anywhere else in California.