Posted on December 13, 2017 by Office of Public Affairs 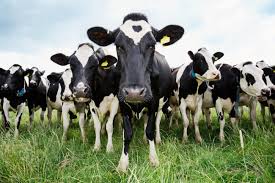 “California Regulates Cow Farts,” is how a New York Post headline put it, implying it was a wacky move by Governor Jerry Brown. In fact, California’s methane law represents a serious attempt by America’s biggest dairy state to come to grips with a potent greenhouse gas.

Methane is responsible for about a quarter of human-generated global warming. While it’s not nearly as prevalent as carbon dioxide, and it breaks down in the atmosphere faster, methane is many times more effective than CO2 at trapping heat. And avoiding a man-made climate catastrophe will require limiting emissions from farms as well as oil and gas pipelines, landfills, and other sources.

In California, most methane emissions are from cows — chiefly the state’s 1.7 million dairy cows, whose manure is typically washed into methane-spewing lagoons. This is why the state, which has pledged to reduce methane emissions by 40 percent by 2030, is looking to the big Central Valley dairy farms for substantial reductions.

Its law limiting methane emissions on dairy farms was passed last year but does not mandate any action before 2024. In the meantime, the state is trying to persuade hundreds of big dairy farms to install contraptions known as methane digesters.

These are basically heavy, lagoon-covering tarps that trap the gas. They can be expensive to install and maintain, but the state is offering grants to help defray the cost, funded with money from its cap-and-trade program. Farmers who use digesters are also allowed to sell carbon offsets or, if their methane is used in fuel, fuel credits.

California utilities are also planning pilot projects to install pipelines to transport methane from dairies and possibly turn it into truck fuel. The state is also encouraging some farmers to do more composting, and to keep manure on pastures and out of lagoons.

Of course, there is also the other end of the cow: They belch a lot of methane into the air. To reduce their output, the state is supporting research on efforts to adjust or supplement their feed — without changing the taste of the milk.

California is keeping an eye on other methane sources as well. The state has the country’s strictest regulation to monitor and repair leaks from oil and gas operations, and it is working to better measure and limit methane from landfills.

The dairy project stands out, however, for its potential to drive a widely applicable technological solution. Bovine gas will always be amusing to headline writers (and middle schoolers, for that matter). But how to reduce dairy methane emissions is a serious and neglected challenge (one that the Trump administration purposely ignores). As with its policies on forests and electric vehicles, California is showing other states how to build the necessary political will and financial commitment to make a difference in fighting climate change.