Posted on December 11, 2017 by Office of Public Affairs 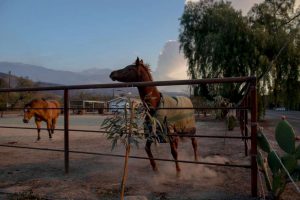 Horses near the fire line last week in Ventura County.

When the mandatory evacuation orders came and the fire rigs blared into their neighborhoods, they stayed.

That’s how about 25 horses across Ventura County survived the firestorms blazing across multiple fronts this week: Herded into the back of Laughlin’s trailer, three at a time, and driven to pastures far away.

It’s not their fault they stayed, confined to barns or chained in pastures, Laughlin said Thursday. He’s not sure why they were abandoned — maybe there wasn’t time for their owners to load them into the trailer or cut their lines loose — but this cowboy is willing to do it for them. He has five horses of his own, and the thought of losing them almost brings him to tears.

“What kind of person would I be if I didn’t save them?” said Laughlin, who lives in Simi Valley.

He’s one of the best-known horse rescuers in the county. His phone number is posted Facebook pages and on the Southern California Equine Evacuation group’s website. His iPhone is constantly ringing. When he gets an address, he goes. The firefighters are usually happy to see him. The police — not so much.

“How come I always see this pick-up truck places where it isn’t supposed to be?” a California Highway patrolman asked him at one stop. Laughlin shrugged. He usually doesn’t brake at the barricaded roads to talk to law enforcement. He just rolls on through.

Laughlin can placate even the most skittish of horses, coaxing them into his trailer with sugar cubes or a rope wrapped like a wedgie around their backside. He grew up riding horses in a dusty Central Valley town called Alpaugh. Now he runs a business training them on his ranch — when he’s not running into flames to rescue other people’s livestock all over the state.

Sometimes he’s too late, or just not in the right place at the right time — like in Sylmar on Tuesday, where about 30 horses were burned to death in their stalls as flames roared over them.

On Wednesday, Laughlin got stuck in traffic with a trailer of horses on his way to Burbank. That took a couple of hours, he said. “Not much sleep these days,” he added.

When there is a lull in a fire, he crashes on a mattress in the back of the trailer. He hides his matted hair with a trucking supply company baseball cap. Sometimes, if it’s convenient, he spends the night in Woodland Hills with his girlfriend.

It’s not uncommon for the horses’ owners to offer him their spare bedroom, their washing machine — he smells like horses, too — or a hot meal. If not, he eats power bars and peanut butter pretzels and wears the same singed blue flannel shirt and blue jeans.

On Thursday, he waited outside a small ranch in Ojai. The fire was still burning up in the hillsides, back where many horse corrals were. A small teddy bear — he calls it his safety bear — was tucked on his dashboard. It’s really there to stop a broken part of his dashboard from jangling, or so he says.

The sky was choked with smoke, and Laughlin checked his phone. While the bucolic city was largely spared that day by the Thomas Fire, he was expecting rescues to happen in Carpenteria as the Santa Ana winds pushed flames north.

His phone rang. Another rescue. He climbed in the truck and drove away, dust barreling behind him.