Farming, a family tradition – from the Visalia Times-Delta

Posted on February 16, 2018 by Office of Public Affairs 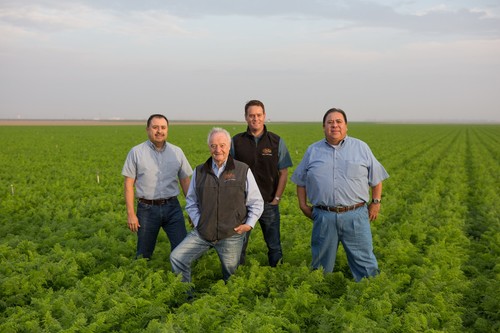 By Danielle A. Martin

Rick Borges knew at a young age that he was going to be a farmer.

It was something his great grandfather, grandfather and father did before him.

Borges now continues the legacy generations before him started with his son, Greg. The family farms cotton on the west side of Tulare.

“We are two years away from being on the same piece of property for 100 years,” Borges said, “It makes me so proud having him here and wanting to continue this on. He had different aspirations when he was away in college but when he came back he realized, as I did early on, out on the ranch back home is the best place to be.”

Whether it’s the memories Borges creates with his son or the nostalgia he gets from farming with his father and grandfather, he truly appreciates the simple joys farming gives him.

“…going back old school, going back to when I grew up, in the open air, with the smell of fresh cut hay, fresh-tilled soil and sitting on a tractor with no radio, alone with your thoughts, just makes me feel great,” Borges said. “That’s why my heart drew me to stay in agriculture.”

Each member of the Borges family was at the World Ag Expo Show (earlier this week) either as volunteers or exhibitors.

The Borges family is also part of the 97 percent of farming operations owned by families. Farmers agree it’s the tradition and the bond that has kept businesses in the family generation after generation.

“Those of us who have been in agriculture, especially here in Central California, are some of the luckiest people in the world,” said Steve Malanca, creator of My Job Depends On Ag campaign. “We would like people to realize that agriculture is family farms.”

But, keeping a family farm alive is becoming another challenge farmers are facing. Individuals in the agriculture industry are also fighting battles with regulations, foreign competitors, trade and in California, water.

Young adults born into a family farming operation or the agriculture industry are seeking careers with fewer hurdles, Malanca said.

“I can tell you that the generation that created these millennials today have a perception that agriculture things are so tough, especially in this state and the thing that we deal with is almost insurmountable,” Malanca said.

For those interested in a career in agriculture, Malaca compared opportunities in the Central Valley to tech opportunities in Silicon Valley.  He argued because of its diversity, the Valley is a great place for first time farmers.

Programs such as Future Farmers of America and universities with agriculture programs encourage students that the industry can be just as rewarding and is filled with opportunity.

“The day after I was born I was dragged home to the farm and since then part of my daily routine was feeding calves, getting up at 6 a.m., moving irrigation, milking cows, you name it, we did it,” Regli said. “Ever since then, I’ve had such a passion for agriculture and that background really helped foster that.”

She used her story as a dairy farmer and student to educated and promote the industry to young people at the farm show.

“The actual average age of a farmer is 58 years old. And while you see young students interested in agriculture, it’s not the actual production side of things,” she said. “It could be ag marketing or ag lobbying.”

Her family motto is simple.

“Faith, family and agriculture was our way of life,” Regli said. “…97 percent of the world’s agriculture is family-owned and operated and that plays such a huge factor in making sure the youth know, maybe they aren’t a fifth-generation farmer, but they can be a first-generation farmer.”