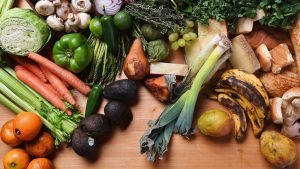 Americans waste about one pound of food per person per day, and they throw away trillions of gallons of water in the process. (Christina House / Los Angeles Times)

According to a new report in the journal PLOS One, we Americans wasted just over 25% of our food between 2007 and 2014.

Although we did a decent job of finishing up our nuts and seeds (only 12% wasted) and potatoes (about 16% wasted), we were not as careful with seafood (nearly 35% wasted), whole fruit (almost 33% wasted) and soups (30% wasted).

Incredibly, Americans even wasted 23% of our bacon, 26% of our grain-based desserts (think cookies, cakes and brownies), and 29% of our salty snacks.

Not interested in taking responsibility for the entire country? The study authors also broke things down on a per-capita basis.

On an average day, an average American wasted a little less than a pound of food (422 grams, to be exact). That represented a dietary loss of more than 800 calories per person per day.

Fruits and vegetables accounted for 39% of that waste (measured by weight), and dairy items contributed an additional 17%. At the other end of the spectrum, egg dishes made up less than 1% of the waste, as did the combined category of table oils and salad dressings.

The research team, led by Zach Conrad of the U.S. Department of Agriculture’s Grand Forks Human Nutrition Research Center in North Dakota, put all this together by linking information in a variety of government databases.

For instance, they gleaned information about Americans’ diets from the National Health and Nutrition Examination Survey, which is conducted by the Centers for Disease Control and Prevention. To find the ingredients in those diets, they used the Environmental Protection Agency’s Food Commodity Intake Database. Surveys conducted by the USDA provided information about agricultural resources such as water and pesticides, and the department’s Economic Research Service provided data to calculate food waste.

The more healthful your diet, the more water and pesticides you wasted as well, the researchers reported.

Past studies have focused on the environmental benefits of producing (and ultimately consuming) fewer animal-based foods and shifting instead to foods that come from plants.

But the new findings show that it’s not that simple.

“Improving diet quality and reducing environmental impact are efforts that should be pursued concurrently,” Conrad and his colleagues wrote. “Consumers should increase their consumption of fruits and vegetables and simultaneously waste less of them.”

The study authors acknowledged that this was easier said than done.

One way to reduce food waste is to buy fewer perishable goods and choose canned or packaged foods that have a longer shelf life. But these items often contain more sodium, saturated fat and added sugar.

Still, the situation is not hopeless.

Americans would waste less food if they knew more about “how to tell when fruits and vegetables are ripe, how to store and prepare them, and how to tell the difference between bruises/abrasions and spoilage,” the researchers wrote.

Bringing some clarity to the “sell by,” “use by” and “best before” dates that are printed on packages could also stop consumers from tossing perfectly good items into the garbage, they added.

In the longer term, engineers are developing sensors that can alert people when food has actually spoiled, reducing the risk that they will wind up sick.

“It is … important to ensure that efforts to reduce food waste at the consumer level do not undermine legitimate food safety concerns,” the study authors wrote. “Spoiled food is a health risk.”