What if people were paid to use less water? – from CityLab

Posted on July 5, 2018 by Office of Public Affairs

Pilot programs in Morocco and California are rewarding people financially for conserving water, rather than charging them for excessive consumption. 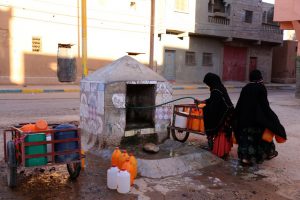 In photo taken Thursday Oct.19, 2017 Moroccan women fill up containers with water from a hose, in Zagora, southeastern Morocco. Experts blame poor choices in agriculture, growing populations and climate change for the water shortages in towns like Zagora, which has seen repeated protests for access to clean water in recent weeks. Since the summer, taps ran dry in Zagora. (AP Photo/ Issam Oukhouya)

From Sao Paulo and Cape Town to Beijing and San Diego, water demand in cities around the world is outstripping supply. Urbanization, developing economies, and shifting precipitation patterns are some of the causes, all with the same result: diminishing water availability in cities all over the world. We need a global rethink, one that starts with turning markets upside down.

A group of university and private partners is working with two water utilities, one in Sonoma, California, and the other in Marrakesh, Morocco, to pioneer a new approach, based on rewarding conservation, rather than charging for consumption. Water markets are hardly new. Farmers trade water in Chile, Australia, and California—revealing the worth of this liquid asset. These markets encourage conservation and ensure that water flows to its highest value crop, whether berry, dairy, barley, or wine. If this is true for farmers, why would it be any different for cities?

In our pilot projects, in two very different locations, water users are now being paid for the water that they save. Participants that save water earn a Water Conservation Credit (WSC). In Sonoma, 100 gallons = 1 WSC; in Marrakesh, 1,000 litres = 1 WSC.

A WSC is awarded to anyone who decreases their usage compared to an individual baseline, a Water Mark. The WSC is volumetric, fungible, and it can be “cashed in” for credit to one’s bill. Water Marks can be set based on historical water rights, past water usage, or customer class (such as commercial, private or non-profit); they can even be set based on the average volume available, if equity is prioritized. In times of drought, Water Marks can be lowered, if need be.

What if we could also value water that is not consumed at all, and kept in the ecosystem or a groundwater table instead?

Rate hikes are like a stick, but a WSC is like a carrot and there are two reasons why these carrots might be especially useful: WSCs can reflect the larger, social value of water; and WSCs are more politically appealing to implement. I’ll illustrate these advantages using the two projects.

Valley of the Moon, California—Setting the Social Value of Water

The social value of water in California reflects its worth to all Californians and covers all of water’s uses, including ecosystem health, clean drinking water, and healthy productive farms. Right now, water meters only value the consumption of water, favoring those uses attached to a meter; but what if we could also value water that is not consumed at all, and kept in the ecosystem or a groundwater table instead? WSCs have all the advantages of conservation-oriented tariffs, but in addition, they can act as bridges helping the rest of society understand the pressures on each water supplier. The WSC program in Sonoma County was enabled by the Valley of the Moon Water District (VOMWD) and is being implemented by a startup company, AquaShares. The way AquaShares has structured the market in VOMWD, anyone can buy WSCs whether they live in Valley of the Moon or not, while savers can cash theirs in for monetary credit, or sell them.

Since only savers can sell, and anyone can buy—this opens up new frontiers for the valuation of water. Do environmentalists want to keep more water in the local ecosystem? They can buy WSCs and keep water in stream. Does Starbucks believe that “water neutrality” will help them sell more coffee? Now they can transparently offset their water footprint. Does the state or county want to link several cities within a basin? Local conservation markets could allow them to do that, without pumping a single gallon. For cities fighting over the same limited water supply, instead of paying for lawyers to sue the other city for overuse, they can pay their own residents for conservation.

The AquaShares market allows online bidding and selling, creating a floating price for water and ultimately resulting in a real-time social valuation of water. California law requires utilities to charge just enough to recover their costs (and no more); therefore they must have control over setting local rates.

Water Conservation Credits are earned each month when meters are read, and the money is automatically credited to the participant’s water bill.

But everyone can buy WSCs, and thereby set the real social value of water in the process. By valuing conservation, the efficiency of markets can be divorced from cost recovery.

Marrakech, Morocco—A Politically Palatable Way of Increasing the Value of Water for Consumers

ONEE (the National Office of Electricity and Potable Water – a branch of the Moroccan government) sells water to RADEEMA (the private concession in charge of the water utility in Marrakech) at a highly subsidized rate. A similar structure is found in many other low- and middle-income countries, and like many such countries, water is a political issue. Keeping water rates low is a good way to win public support, while raising water tariffs is a good way to foment broad political resistance.

WSCs allow the value of water to increase without increasing rates; no one is going to protest a reward for conservation. Does this make economic sense? Yes, if the payment for water conservation is less than the cost of producing the same volume of water through ecologically disruptive new supplies. Indeed, where water is subsidized, the government itself could be one of the primary purchasers of WSCs; ONEE may find it more cost-effective to buy WSCs rather than build a desalination plant, as it is currently planning to do for the city of Agadir.

Through a collaboration between AquaShares, Harvard University, Columbia University and GlobalNexus, we have designed the WSC program in Marrakech so that WSCs are earned each month when meters are read, and the money is automatically credited to the participant’s water bill. All interactions occur over SMS messages, giving our team a direct link to water users. Everyone has a mobile phone, so once Marrakech upgrades to automatic readers the whole process will be stream-lined and seamless. WSCs cannot be earned if consumption drops below 50 liters per person per day, protecting a life-line amount for low-income residents.

There are many cities heading toward the same crisis situation as Cape Town, South Africa. We need to design water management systems in ways that are politically tractable, efficient, socially engaged and environmentally sustainable.

WSCs may be a good start; here’s hoping that our pilots in California and Morocco yield some interesting results in the days to come.