What will we be eating in 2050? Farmers weigh several factors – from Grist 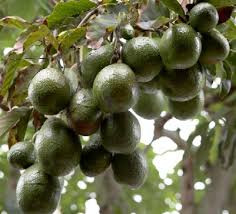 Chris Sayer pushed his way through avocado branches and grasped a denuded limb. It was stained black, as if someone had ladled tar over its bark. In February, the temperature had dropped below freezing for three hours, killing the limb. The thick leaves had shriveled and fallen away, exposing the green avocados, which then burned in the sun. Sayer estimated he’d lost one out of every 20 avocados on his farm in Ventura, just 50 miles north of Los Angeles, but he counts himself lucky.

“If that freeze was one degree colder, or one hour longer, we would have had major damage,” he said.

Avocado trees start to die when the temperature falls below 28 degrees or rises above 100 degrees. If the weather turns cold and clammy during the short period in the spring when the flowers bloom, bees won’t take to the air and fruits won’t develop. The trees also die if water runs dry, or if too many salts accumulate in the soil, or if a new pest starts chewing on its leaves. “All of which is quite possible in the next few decades, as the climate shifts,” Sayer said.

The weather had been strange lately, Sayer told me. In the past year, Californians have lived through a historic drought, a massive wildfire that blotted out the sun, and a strangely warm winter followed by that unseasonable freeze. When I visited in April, his lemon trees were already loaded with ripe fruit — that usually doesn’t happen until June. “Things are screwy,” Sayer said.

From the vineyards of the north coast to the orange groves of Southern California, farmers like Sayer have been reeling from the weird weather.

It might feel like we’re peering into the distant future when we hear that by 2050, temperatures may very well climb 4 degrees, seas could rise a foot, and droughts and floods will become more common. But for farmers planting trees they hope will bear fruit 25 years from now, that seemingly distant future has to be reckoned with now.

A lot of the country’s tree crops grow in California, which produces two-thirds of the fruits and nuts for the United States. The same is true of grape vines, which bear abundant fruit for about 25 years (they slow down after that, but can keep going for hundreds of years). It’s in large part because so many farmers are making these long-term gambles on orchard crops that a recent scientific paper noted: “Agricultural production in California is highly sensitive to climate change.”

In other words, for anyone trying to make money off long-lived crops, climate change is already here. And yet new saplings are pushing out of the ground all over the state.

After years of putting it off, Sayer is about to place such a four-decade bet by planting a bunch of new avocado trees. There’s no way Sayer can foresee oncoming climate disaster, if that’s what’s hurtling toward the land his family has worked for the past 130 years in Ventura. He can see just a little bit of what might be coming — as if he’s straining to glimpse signs of danger while blinkered. When I asked him how it felt, he said: “Like I’m about to cross a very busy road with my hood pulled over my head.”

When Katherine Jarvis-Shean was a doctoral candidate researching the decline of cold winters a few years back, she thought more farmers should be freaking out. “I used to think, ‘Why aren’t you guys more worried about this? It’s going to be the end of the world.’”

After all, many fruit and nut trees require a good winter chill to bear fruit. But after spending a few years as an extension agent for the University of California — working directly with farmers and translating science into techniques they can apply on the land — she understands better. It comes down to this: Farmers have a ton of concerns, and the climate is just one of them.

“If you decide what to plant based on climate, but then can’t make the lease payment, that’s not sustainable,” Jarvis-Shean said.

If you are worried about water running out in 15 years, you might think it’s a good idea to cut down half the state’s almond groves — but if those almond trees are still putting money in your pockets, that wouldn’t make sense until the killer drought hits. That’s the crux of the matter for Sayer, and other farmers I interviewed. They’re concerned about the changing climate, but they always come up with ingenious plans to adapt to bad weather. It’s much harder for them to adapt to an overdrawn bank account.

Sayer grows mostly lemons right now, but they’re not long for this world. “You can see these lemon trees are getting a little rangy looking,” Sayer said, gesturing toward a leafless branch. “This is going to be their last harvest, then they’ve got a date with the chipper.”

Sayer knows lemons. He knows how to coddle them in old age, how to nudge them to produce more, how to keep them alive when rains fail, how to protect them from aphids and snails and scale insects and the nematodes in the ground. But this land has provided a home to a citrus orchard for 70 years, and each year more pests accumulate to suck the life from the trees. So Sayer needs to move on from lemons, and he’s settled on avocados.

From a climate perspective, the leather-skinned fruit are a risky choice. Avocado trees like their surroundings not too hot and not too cold, and they always need water. One study estimated that climate change would hurt California avocado trees so much that the state’s production could be cut in half by 2050.

As the sun burned off the marine layer of clouds over the orchard, Sayer patiently laid out the reasoning that led him to plant avocado trees. He explained that climate poses risks that are easy for outsiders to see — when you’re reading about historic droughts in the newspaper and driving past acres of withered crops, it seems crazy to plant orchards. But farmers often have to contend with other risks that outweigh the danger of bad weather. Sayers puts them into three categories: climate risk, market risk, and execution risk.

If he were only worried about climate risk, Sayer said, he’d plant prickly pear. “They would grow in any post-apocalyptic hellscape you could imagine,” he said. But who would buy them?

Full article: “What will we be eating in 2050? Farmers weigh several factors” from Grist