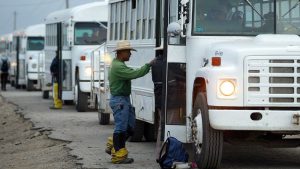 D’Arrigo Bros. and the United Farm Workers once took more than 25 years to reach a contract, and for many years afterward they communicated mostly through court filings and job actions.

But the top leafy green grower in California’s Salinas Valley and the national union founded by Cesar Chavez just inked a three-year contract amid fanfare and pledges of a new era of cooperation.

The deal came after the aging patriarchs on both sides — family scion and company President John D’Arrigo and longtime UFW President Arturo Rodriguez — engaged in months of personal diplomacy this year, each seeking to relieve the economic pressures that threaten their viability, including a shrinking farm labor force.

“Arturo and I, you know, we’re getting too old to fight,” said D’Arrigo, 60, whose grandfather co-founded the company in 1927. “There’s always been a lot of propaganda, and a lot of things said — some of them true and some of them not true. All of that is in the past. We shook hands and we’re moving on.”

The newfound comity, however, springs as much from economic exhaustion as from each leaders’ respective reckonings with longevity. The UFW will boost its income from membership dues and the number of paid subscribers to its state-subsidized health insurance program.

The UFW also further burnishes its reputation after several bruising battles to keep workers from voting it out of farms, and a costly legal judgment it has been forced to pay its own organizers.

“We both came to agreement that it was much better for us to collaborate and work together, that we could accomplish far more than both of us spending so much money on attorneys and legal issues — and in the end nobody really gains,” said Rodriguez, 69.

For D’Arrigo Bros., the deal could help stem millions of dollars in losses from crops that have been plowed under because of a persistent shortage of workers, who are growing older and not being replaced by new immigrants.

The contract also gives D’Arrigo some shelter from the state’s new rules on overtime pay, which exempt farmworkers covered by collective bargaining agreements.

With about 38,000 acres under cultivation in the Salinas and Imperial valleys, D’Arrigo is trying to fortify its permanent workforce and rely less on seasonal contract labor, including foreign workers recruited under the agricultural guest worker program known as H-2A.

“Up here all of us are competing for the same worker,” D’Arrigo said of the Salinas Valley. “We’re not solving the problem at all. People are moving around going from company to company but we’re still short.”

D’Arrigo is not alone. Growers have been offering sharply higher wages, while some offer subsidized housing, contributions to 401(k) savings plans and similar perks unheard of in the days of Chavez, who was jailed in Salinas during the often-violent lettuce boycotts of the 1970s.

Wages for crop production in California increased 13% from 2010 to 2015, twice as fast as average pay in the state, according to a Los Angeles Times analysis of data from the Bureau of Labor Statistics.

Labor contractors involved in high-value crops such as wine grapes are essentially four years ahead of the state’s minimum-wage law, offering $14 per hour, which won’t be required until 2022.

Temporary foreign workers have long been anathema to the UFW. Chavez famously fought to end the bracero program that brought millions of Mexican temporary laborers north in the decades after World War II, depressing wages for the largely immigrant workforce already north of the border.

For all the fanfare that came with last week’s signing, the hourly wage increases in the contract are relatively modest: $13.35 next year (retroactive to last April), rising to $14.40 by the third and final year.

Rodriguez said the union placed a higher priority on getting D’Arrigo to pay for family coverage through the UFW’s Robert F. Kennedy Farm Workers Medical Plan, a cost Rodriguez estimated at more than $600 per worker.

“Workers felt like: We can go to a doctor and blow an increase in one visit,” Rodriguez said. “So they felt it was more important to place value on the family medical plan and the vision and dental plan.”

The plan, which covers an estimated 13,000 workers, receives a $3-million annual subsidy from the state, in part to bring its claim limits into compliance with the federal Affordable Care Act — a deal the UFW pushed in Sacramento, arguing it would prevent the greater costs of serving workers under Medi-Cal.

That funding, aimed at giving the UFW time to build up the trust fund’s reserves, is secure through 2021, according to the bill, which was sponsored by the UFW and signed by Gov. Jerry Brown in 2015. That year, the RFK plan reported nearly $29 million in revenue, according to the most recent IRS filings.

Other unions complain that the subsidy gives the UFW an unfair advantage in competing for workers.

Several recent victories by the UFW have been at the expense of other unions. Two years ago, it replaced the International Assn. of Machinists and Aerospace Workers at a Foster Farms plant in Livingston in Merced County, and it outcompeted the United Food and Commercial Workers at nurseries in Ventura County the same year.

“We’d love to have that $3 million,” said Pete Maturino, director of the agricultural division of the United Food and Commercial Worker Union’s California and Arizona local, which represents about 180 shipping and processing workers at D’Arrigo.

Mechanical harvester operators earn $14.17 under a contract the union signed more than a year ago — a wage comparable to the UFW contract, Maturino said.

“The only thing not comparable is the medical plan,” he added.

Maturino noted that workers have been engaging in wildcat job actions over the last several years, winning increases of as much as $2 an hour at a handful of the region’s top produce plants.

“Employers are starting to battle each other for the labor force,” he said. “Sooner or later in the next few years we’ll be at $15 an hour.”

Philip Martin, an economist at UC Davis, said he doubts the D’Arrigo contract will have much of an effect on strategies at other produce companies. “The race in the lettuce fields is between machines and migrant H-2As,” he said.

The UFW has no specific plans to bolster its organizing efforts, but will focus on gaining a contract for about 500 workers at Premiere Raspberries on the Central Coast, and will work to consolidate its gains in already unionized fields, Rodriguez said.

“Our first priority this year is to be sure we do the work necessary to really develop this collaborative relationship with John D’Arrigo and set a real example of what can be done in the ag industry,” Rodriguez said.

Both men said they are in near-constant contact with each other since first sitting down in Los Angeles in December.

“He and I since then have already talked 30 times by phone — it’s been that often,” D’Arrigo said.

“Lots of people talk a good game and they say nice things in order to get things resolved and you never really know how serious they are,” said Rodriguez. “I have to say in this case, John was dead serious from the get-go.”

The elder D’Arrigo led the company when it was among the targets of an economically crippling nationwide lettuce boycott marked by arrests, brawls and the bombing of a UFW office.

“He said, ‘You know what, if you can make a contract that you can live with, and that he can live with, go for it.’ ” D’Arrigo said. “He’s so happy, because he had all those years of fighting. That’s back when it got pretty violent.”

This entry was posted in Farm Labor, Uncategorized. Bookmark the permalink.