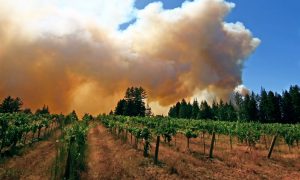 The USDA has announced that agricultural producers affected by hurricanes and wildfires in 2017 now may apply for assistance to help recover and rebuild their farming operations. Sign-ups began July 16, 2018 and will continue through November 16, 2018.

“Hurricanes and wildfires caused billions of dollars in losses to America’s farmers last year. Our objective is to get relief funds into the hands of eligible producers as quickly as possible,” said USDA Secretary Sonny Perdue. “We are making immediate, initial payments of up to 50 percent of the calculated assistance so producers can pay their bills.”

Additional payments will be issued, if funds remain available, later in the year.

The program, known as the 2017 Wildfires and Hurricanes Indemnity Program (2017 WHIP) was authorized by Congress earlier this year by the Bipartisan Budget Act of 2018.

Eligible crops, trees, bushes, or vines, located in a county declared in a Presidential Emergency Disaster Declaration or Secretarial Disaster Designation as a primary county are eligible for assistance if the producer suffered a loss as a result of a 2017 hurricane.

Also, losses located in a county not designated as a primary county may be eligible if the producer provides documentation showing that the loss was due to a hurricane or wildfire in 2017. Eligibility will be determined by Farm Service Agency (FSA) county committees.

Agricultural production losses due to conditions caused by last year’s wildfires and hurricanes, including excessive rain, high winds, flooding, mudslides, fire, and heavy smoke, could qualify for assistance through the program. Typically, 2017 WHIP is only designed to provide assistance for production losses, however, if quality was taken into consideration under the insurance or Noninsured Crop Disaster Assistance Program (NAP) policy, where production was further adjusted, the adjusted production will be used in calculating assistance under this program.

Eligible crops include those for which federal crop insurance or NAP coverage is available, excluding crops intended for grazing. A list of crops covered by crop insurance is available through the U.S. Department of Agriculture’s (USDA) Actuarial Information Browser at webapp.rma.usda.gov/apps/actuarialinformationbrowser.