California groundwater law means changes above ground, too – from KQED 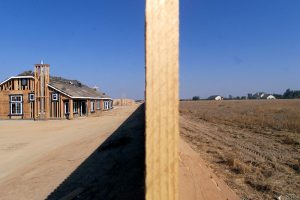 The Sustainable Groundwater Management Act (SGMA), adopted in 2014, will change more than groundwater. The requirement to end overdraft will also transform land use, a massive side effect yet to be widely recognized.

Parts of California will literally look different once the law takes full effect. It could put some farmers out of business. It could change how others farm.

In some areas, farms will have to be fallowed to reduce groundwater demand. That idled farmland will have lots of important new uses. Some could become wildlife habitat or groundwater recharge basins. Others could be useful for solar energy development and other semi-industrial uses. Undoubtedly, some will become housing subdivisions.

City and county government leaders are starting to realize there’s a lot at stake. The landscape itself will change as groundwater extraction changes. Without careful planning, property tax revenues that fund a wide variety of essential government services could be compromised.

“I don’t believe it is a groundwater law. I believe it’s a land use law,” said Lorelei Oviatt, director of planning and natural resources in Kern County, the southernmost county in California’s fertile San Joaquin Valley. “In my mind, SGMA has actually opened up doors for new technology – new ways of looking at how we use our land.”

But Kern County isn’t alone. Many other California counties are in the same situation. All but three of the 14 groundwater basins in the San Joaquin Valley are ranked as critically overdrafted. Ten others, mostly along the Central Coast, are also critically overdrafted. Several dozen more throughout the state are ranked as high or medium priority, which also face deadlines to bring their aquifers into balance, meaning extraction and replenishment are equalized.

But Kern County isn’t alone. Many other California counties are in the same situation. All but three of the 14 groundwater basins in the San Joaquin Valley are ranked as critically overdrafted. Ten others, mostly along the Central Coast, are also critically overdrafted. Several dozen more throughout the state are ranked as high or medium priority, which also face deadlines to bring their aquifers into balance, meaning extraction and replenishment are equalized.

Protecting recharge zones from urbanization will become a new focus of growth management, but it can’t be the only focus. In areas like the San Joaquin Valley, there is not a lot of surface water available for recharge because most of it is diverted from Northern California and already in high demand.

That leaves storm runoff as the main recharge option, and many areas of the San Joaquin Valley are well suited to that: The valley was a giant floodplain, after all, before it was developed for farming.

But storm runoff is not available in all years. In addition, as the PPIC notes in a recent report, most available storm runoff occurs in the north part of the San Joaquin Valley, while the best recharge lands are in the south. Hence, new infrastructure will be needed to channel flood flows to basins where it can be recharged.

“At best, you can probably meet up to a quarter of the deficit with additional recharge,” Hanak said. “That means you’ve still got a big gap to fill. So there’s a growing recognition that this is going to mean some land coming out of production in the valley.”

She estimates 10–12 percent of farmland in the San Joaquin Valley will have to be fallowed as a conservation measure to reduce demand on groundwater. That doesn’t sound like a lot. But it amounts to about 600,000 acres – roughly equal to seven cities the size of Fresno.

How all that land gets reused is a huge issue for the region.

A lot of good farmland is also suitable for groundwater recharge, and the two are not incompatible. University of California research found that 3.6 million acres of crops in the state may be suitable for recharge. At the right time and in the right quantities, shallow flooding works on crops as diverse as alfalfa, wine grapes and almonds.

Kara Heckert, state director of the American Farmland Trust, said it is important to make sure the most productive farmland is spared from fallowing. The nonprofit recently published a report that found 323,000 acres of farmland in the San Joaquin Valley could be lost to development by 2050 as suburban sprawl creeps out from cities like Lodi, Manteca, Hanford and Bakersfield. About half of that acreage is considered high-value farmland.

The message is that cities, counties, farmers and groundwater sustainability agencies (GSAs) need to work together in new ways.

“Land quality across the San Joaquin Valley should be a consideration used by [GSAs] when they are determining groundwater allocations within their districts,” said Heckert. “Ensuring the best agricultural land continues to receive adequate groundwater supply will help maintain California’s agricultural production and natural heritage.”

Hanak said governments could offer a variety of incentives to derive the most benefit from farmland retirement. Grants and tax breaks, for instance, could encourage fallowing in certain areas to create new wildlife refuge areas or to expand existing refuges.

Less productive farmland near utility corridors could be rezoned for alternative energy development. This would encourage crop fallowing to cut groundwater use while also boosting property taxes collected on these lands.

“It can’t just all become open space,” she said. “Open space doesn’t pay enough property taxes to keep our sheriff and our parks and libraries alive. As a land use planner, I believe it’s my responsibility to make sure this works for everyone.”

Oviatt noted that local governments face a conflict in planning their growth. State laws encourage them to both conserve water and build more homes to address the housing affordability crisis in California. Those goals are in conflict, especially in a region like the San Joaquin Valley, where many local communities rely on groundwater, and SGMA will make that groundwater harder to come by.

“We are not having a big enough dialogue about how the new water rules fit in with this whole idea of building more houses,” she said.

One strategy, she said, would be to require all new homes to include on-site gray-water recycling. Another is a water trading scheme for residential development. Kern County already does this in the Tehachapi area, a mountainous community east of Bakersfield that relies on sparse groundwater.

A developer who wants to build a 50-home subdivision in Tehachapi can buy the water he needs from other unbuilt lots in the region, if he can find willing sellers. The process concentrates both the water use and the housing development. Something similar could work throughout the San Joaquin Valley to control where development occurs and where groundwater gets pumped.

“We need more tools in this new water world we’re in,” Oviatt said.

SGMA has been criticized for its distant deadlines, because hundreds of new wells are being drilled in the meantime, putting additional strain on groundwater. But it may turn out to be a good thing that this law creeps along like a wagon train. It will take years to manage all the land use changes that will accompany changes in groundwater use.

“I don’t think anybody is under the illusion that it’s all going to work perfectly,” said Hanak. “The good thing about this is, it’s not an overnight thing that’s going to happen. It’s something that people will have some time to plan for.”

One Response to California groundwater law means changes above ground, too – from KQED