A Discussion on Food Access and Healthy Food Choices

Posted on August 2, 2011 by Office of Public Affairs 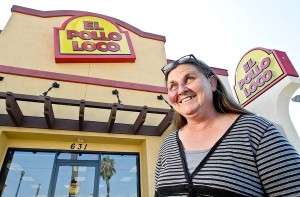 Anna Harrald likes to eat at Taco Bell because the hard-shell tacos are “nice and cheap and good.” From KFC and El Pollo Loco, the chicken she stores in a friend’s refrigerator will feed her for days.

The 46-year-old homeless woman, who sleeps by a canal along the 710 Freeway in Long Beach, is one of at least 141,000 people in Los Angeles County eligible to use their food stamps at local restaurants under a state program aimed at helping the elderly, homeless and handicapped get a meal.

When California launched the Restaurant Meals Program in 2004, advocates hailed it as a solution to feeding those who don’t have the means or ability to prepare their own meals.

But nearly 94% of participating restaurants in the state are fast-food establishments, and U.S. Department of Agriculture officials are concerned that the program may be undermining the goal of promoting healthful eating.

This entry was posted in Food Access. Bookmark the permalink.