Posted on September 20, 2012 by Office of Public Affairs 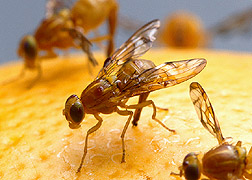 The following is a summary of scientific research by the USDA.

Released en masse, sterile Mexican fruit flies can undermine a wild population of the fruit-damaging pests so that fewer applications of insecticide are needed. But the irradiation used to sterilize the flies weakens them, hindering their ability to outcompete wild-type males for female mates.

Now, U.S. Department of Agriculture (USDA) and collaborating scientists have devised a hormone therapy for making sterile flies “more macho,” improving their chances of mating with female flies before their wild rivals do. Peter Teal, a chemist with USDA’s Agricultural Research Service (ARS) in Gainesville, Fla., developed the hormone treatment in conjunction with a team of scientists from Mexico, Argentina and Austria.

Anastrepha ludens (Loew), the Mexican fruit fly, is a significant quarantine pest that could inflict billions of dollars in losses to citrus, peach, pears, avocado and other crops if it moved from Mexico into the United States. Fortunately, Mexico operates a sterile-insect release program to control the green-eyed, one-centimeter-long pests, whose larval stage feeds inside host fruit.

The program involves sterilizing male fruit flies with irradiation and releasing them into nature to mate with the wild female fruit flies. These matings produce eggs that don’t hatch. Eventually, the population collapses, explains Teal, who leads the ARS Chemistry Research Unit in Gainesville.

The team’s treatment uses a hormone analog called methoprene to speed the rate at which sterile male flies reach sexual maturity while kept in specialized holding facilities. In studies, methoprene-treated flies were ready for release four days sooner than non-treated flies. And thanks to a dietary supplement of hydrolyzed protein, the sterile flies, once released, were also stronger and more successful at competing for mates.

The results of this research were published in the Journal of Applied Entomology.

Read more about the program in the September 2012 issue of Agricultural Research magazine.