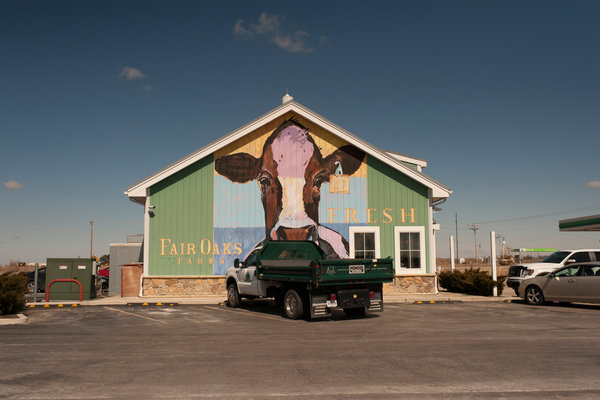 FAIR OAKS, Ind. — Here at one of the largest dairy farms in the country, electricity generated using an endless supply of manure runs the equipment to milk around 30,000 cows three times a day.

For years, the farm has used livestock waste to create enough natural gas to power 10 barns, a cheese factory, a cafe, a gift shop and a maze of child-friendly exhibits about the world of dairy, including a 4D movie theater.

All that, and Fair Oaks Farms was still using only about half of the five million pounds of cow manure it vacuumed up from its barn floors on a daily basis. It burned off the excess methane, wasted energy sacrificed to the sky.

The farm is now turning the extra manure into fuel for its delivery trucks, powering 42 tractor-trailers that make daily runs to raw milk processing plants in Indiana, Kentucky and Tennessee. Officials from the federal Department of Energy called the endeavor a “pacesetter” for the dairy industry, and said it was the largest natural gas fleet using agricultural waste to drive this nation’s roads.

“As long as we keep milking cows, we never run out of gas,” said Gary Corbett, chief executive of Fair Oaks, which held a ribbon-cutting event for the project this month and opened two fueling stations to the public.

“We are one user, and we’re taking two million gallons of diesel off the highway each year,” he said. “That’s a big deal.”

The switch comes at a time of nascent growth for vehicles that run on compressed natural gas in the United States, as some industries — particularly those that require long-haul trucking or repetitive routes — have started considering the advantages of cheap natural gas, close to half the price of a gallon of diesel fuel for the same amount of power.

The American Gas Association estimates there are about 1,200 natural gas fueling stations operating across the country, the vast majority of which are supplied by the same pipelines that heat houses.

But the growing market is also drawing interest from livestock farmers, landfill management companies and other industries handling methane-rich material that, if harnessed, could create a nearly endless supply of cleaner, safer, sustainable “biogas,” while reducing greenhouse gas emissions.

To be sure, no one is pretending that waste-to-energy projects will become a major part of the larger natural gas vehicle market. But supporters say it could provide additional incentive to make biogas systems, which have lagged behind other sustainable energy solutions, more commercially viable.

“You’re essentially harvesting manure,” said Erin Fitzgerald, a senior vice president at the Innovation Center for U.S. Dairy, who says that farmers across the country are starting to think about whether the model tried at Fair Oaks will work for them. “It’s not glamorous. It doesn’t really catch your eye like wind and solar.”

Mike McCloskey, a co-owner of Fair Oaks, said he first started looking into renewable energy options for the farm more than a decade ago, when the smell of manure, used as fertilizer on his fields, started drawing complaints from some neighbors.

Today, the farm is running sophisticated $12 million “digester” facilities that process its overabundance of manure, capturing natural gas that runs electric generators or is pumped underground to a fueling station. The leftover byproduct is still spread on the fields as fertilizer.

While Mr. Corbett would not divulge how much money the farm saves by its switch to biogas fuel, he said the gas stations had already brought in new revenue from other trucking fleets.

Dennis Smith, director of the Clean Cities program for the federal Department of Energy, said about 8,000 large-scale dairy and swine farms across the country could potentially support similar biogas recovery projects. When coupled with landfills and wastewater treatment plants, he said, there is potential to someday replace as much as 10 billion gallons of gasoline annually with renewable fuel.

Still, not everyone is convinced that the time is ripe for more manure-powered vehicles, particularly when regular natural gas remains abundant and cheap.

“The market is just not firm yet,” said Michael Boccadoro, a bioenergy consultant from California who is finishing a study of the possibility of neighboring dairies in the San Joaquin Valley sharing a single digester. “It’s all a tiny bit premature.”

That has not stopped AMP Americas, a Chicago company that partnered with Fair Oaks on the fuel project. The company plans to build 15 more natural gas stations this year, with some in Texas and the rest along two major Interstates in the Midwest.

For now, each station will be supplied primarily by traditional pipeline gas, but the company plans to partner with more dairy companies along the way, getting help from Mr. McCloskey and the Fair Oaks story.

“I think the whole country is ready for this,” Mr. McCloskey said. “I think you’re going to look around in five years and be very surprised at what you see.”