Posted on June 5, 2013 by Office of Public Affairs 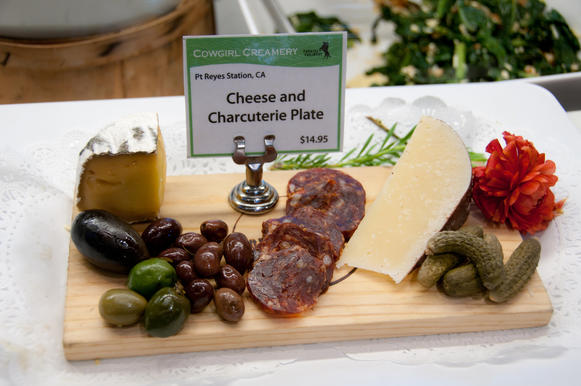 As you drive north of San Francisco into Marin and Sonoma counties, the countryside begins to unfold before you. Green pastures, oak and chaparral-covered hillsides and small canyons of redwood trees reveal themselves. Red-tailed hawks and osprey fly overhead, deer graze in the hills and at sunset, bobcats survey the terrain. A setting so lovely that you can’t help but think cheese. Wait — not wine? Perhaps that too, but we’re talking here about the Sonoma Marin Cheese Trail that winds through the countryside, connecting family farms and food artisans that create batches of distinctive cheeses from local grass-fed cows, goats and sheep.

Like wine, cheese reflects the terroir, or flavors, of the soil, as well as the climate, humidity and environment of the place where it’s made, and the green grasses of spring in Sonoma and Marin counties contribute to the sweetest milk and cheeses.

The informal 100-mile-long route passes seven creameries that are open to the public year-round for tasting, as well as about a dozen that offer tours April through October or by appointment (advance reservations required). Some have cheese-making classes or shaded picnic areas. Several are farmstead creameries, meaning the cheese makers raise their own animals, use only milk from their own herds, and make and package their own cheese — the entire process is done in-house.

You can download the Sonoma Marin Cheese Trail map at www.cheesetrail.org, and a new Cheese Trail app should be available this month. Always call ahead — preferably a month in advance —to make reservations for any cheese tour.

Although cheese making has become au courant, with the number of cheese artisans doubling in the last 10 years, the craft dates back a century and a half in these dairy-friendly counties of Northern California. In 1865, Jefferson Thompson started the Marin French Cheese Co. near Petaluma to make soft-ripened cheeses for dock workers in San Francisco. The stevedores, many of whom were Europeans destined for or fleeing from California’s gold fields, ate pickled eggs and beer for lunch, but eggs were in short supply. Thompson bought 700 acres of pastureland 30 miles north of the city and begin making egg-shaped soft-ripened cheese balls and selling them at bars where the workers ate lunch. Soft-ripened cheese is still the specialty of the Marin French Cheese Co.

The Cheese Factory, as it’s known locally, sells 40 varieties of cow and goat cheese, including its traditional breakfast cheese, as well as bries, Camembert, Schloss and blues. Visitors who take the tour can watch artisans hand-make cheese. Then they can buy local cheeses as well as bread, crackers, sandwiches and cookies in its store — and settle in at picnic tables by a duck pond. The surrounding landscape is dotted with cows and covered with orange poppies and purple lupine in spring.

Artisans at Cowgirl Creamery at the Tomales Bay Food Co., in the four-block-long village of Point Reyes Station, hand-make and sell organic semi-soft cheeses using milk from nearby dairies. Curd-making demonstrations on Wednesdays and Fridays include tastings of cheeses named after local features. Red Hawk, which honors red-tailed hawks, is a distinctive pungent — some say “stinky” — variety that gets its reddish rind from a native bacteria. Mt. Tam, named for Marin County’s dominant peak, 2,572-foot Mt. Tamalpais, has an earthy flavor described as “reminiscent of white mushrooms.” Pierce Point, named for a peninsula in nearby Point Reyes National Seashore, is washed in muscato wine and rolled in dried herbs. St. Pat has a green rind — made by wrapping cheese in organically grown local stinging nettles that have been frozen so the sting disappears — and represents the green hills of spring, the season when this cheese is made.

At the other extreme of artisan cheese-making is Matos: 40 cows, one farm, one family, one cheese. The family brought the recipe from São Jorge in the Azores in the 1970s and now sells wedges of St. George’s cheese at its unassuming farm near Sebastopol.

The third and fourth generations of this artisan cheese-making family produce and sell several varieties of jack, cheddar and Italian-style cheeses in their tiny shop two blocks northeast of Sonoma Square (also called Sonoma Plaza). The plaza is surrounded by galleries, trendy shops, restaurants and Mission Solano, built in 1823.

The creamery celebrates its 100th anniversary this year and has 45-minute weekday tours showing the cheese-making process. Larger than some of the other local artisan cheese-making companies, it makes and sells a variety of natural and organic cheddars and jacks as well as curds, butter and (soon) sour cream. It’s only half a mile from the boutiques and cafes in beautifully refurbished century-old buildings along the Petaluma River. Tours are by appointment only and must be reserved in advance. $20 for adults.

The following are open occasionally and by reservation only:

The hilltop Robert Giacomini Dairy — and its 330 dairy cows — overlooks 12-mile-long Tomales Bay and the hills of Point Reyes National Seashore. “Farmstead” means the Giacomini family controls the entire cheese-making process from the birth of the calves through the milking and aging to wrapping of their Toma, fresh mozzarella and two blues. Cheese-making and cooking classes, taught by well-known Bay Area chefs, are held at their Fork culinary and educational center several times each month.

Want to cuddle a baby goat? Achadinha occasionally offers an all-day wine-and-cheese workshop that promises “all the baby goat cuddling you can handle.” Tours are by appointment on the 290-acre Pacheco Ranch, where 600 goats graze year-round just a couple miles southwest of Petaluma. Their milk gets made into a hard, aged cheese named Capricious and fresh cheeses, including five flavors of California Crazy Curd: Mellow Yellow (plain), Hot Hilda (cayenne), Herbie Curd (herb), Smok’in Goat (mesquite) and Lonely Goat (garlic).

From spring to fall, tours of 160-acre Toluma Farms — in western Marin County two miles from Bodega Bay — take place the first Sunday of the month and at other times by appointment. Consider buying some goat or mixed-milk cheese and driving west for a picnic on Dillon Beach, a dog-friendly strand (but bring a jacket in case of late-afternoon summer fog).

This relatively new creamery (started in 2011) makes two types of farmstead sheep cheese and five varieties of organic artisan cow cheese. Its sporadic summer tours include tastings and visits to the sheep in the fields.

Bodega’s “eco-tours” focus on sustainable agriculture using solar, rainwater catchment, permaculture and other methods to reduce expenses (and help the planet). “Small farms can only make a profit,” owner Patricia Karlin said, “by decreasing bills.” Her goal is to grow all the food for all the animals (goats, chickens and ducks) on the farm itself. The tour ends with tastings of her farmstead aged, fresh and dessert-style cheeses. Call ahead. Tours $20 a person, or $80 minimum.

This entry was posted in Uncategorized and tagged Cheese, Marin, Sonoma. Bookmark the permalink.