Posted on September 23, 2013 by Office of Public Affairs 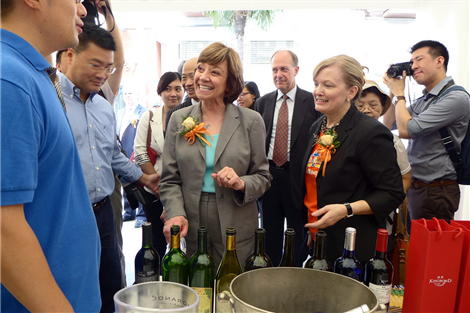 CDFA Secretary Karen Ross chats with an exhibitor at the first California Week, which opened last week in Shanghai. The four-day event aimed to build up a “California brand” by showcasing products like wine, soft drinks, fruit and snacks. The US Consul General in Shanghai Robert Griffiths (behind Secretary Ross) was also present.

To further bolster business ties between China and California in the United States, California Week was opened in Shanghai (last week), (at) which (there is) an exhibit at the city’s downtown Yandang Road of the best agricultural and lifestyle products from the state.

The event was planned when California Governor Jerry Brown visited Shanghai in April as he joined a celebration of setting up a trade and investment office in the city to enhance economic cooperation.

“We hope to bring Shanghai people a real taste of California,” said Karen Ross, secretary of California Department of Food and Agriculture.

California is a gateway of the United States to the Asia Pacific. It is home to 53 companies in the Fortune Global 500 list and also a major producer of agricultural products.

The four-day event, which showcased many things California — from wine, soft drinks, fruit and snacks to culture and attractions, aimed at building up a “California brand.”

As a major exporter in the US to Asia, California sold US$13.6 billion in goods to China last year.

In June, Chinese President Xi Jinping and his American counterpart Barack Obama had a summit in California, which was a historic meeting to build up a closer bilateral relationship between the world’s two biggest economies.

Last month, China’s National Development and Reform Commission signed an agreement with California to strengthen collaboration in the areas of climate change and low-carbon development.