Posted on February 25, 2014 by Office of Public Affairs 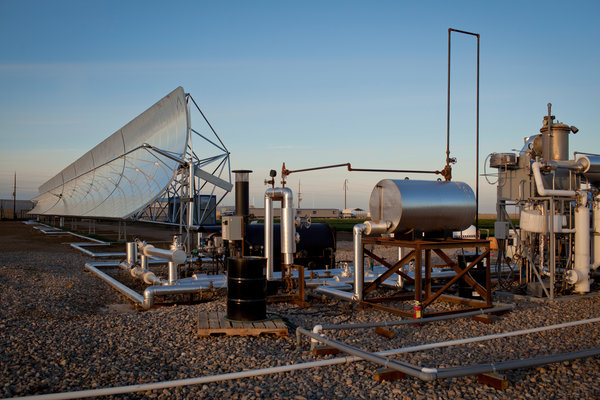 A solar receiver in a field in Firebaugh, Calif. It is part of a project developed by WaterFX to cleanse water at a lower cost than traditional desalinization. Credit – Peter DaSilva for The New York Times

FIREBAUGH, Calif. — The giant solar receiver installed on a wheat field here in California’s agricultural heartland slowly rotates to track the sun and capture its energy. The 377-foot array, however, does not generate electricity but instead creates heat used to desalinate water.

It is part of a project developed by a San Francisco area start-up called WaterFX that is tapping an abundant, if contaminated, resource in this parched region: the billions of gallons of water that lie just below the surface. Financed by the Panoche Water District with state funds, the $1 million solar thermal desalinization plant is removing impurities from drainage water at half the cost of traditional desalinization, according to Aaron Mandell, a founder of WaterFX.

If the technology proves commercially viable — a larger plant is to be built this year — it could offer some relief to the West’s long-running water wars.

WaterFX faces a daunting and urgent task. The water is tainted with toxic levels of salt, selenium and other heavy metals that wash down from the nearby Panoche foothills, and is so polluted that it must be constantly drained to keep it from poisoning crops.

And with California facing a record-breaking drought, the spigot has gone dry for farmers that depend on long-term contracts with the federal
government’s Central Valley Project to deliver cheap water from the north. Irrigation costs are expected to double or triple as growers are forced to buy water on the spot market. “Food prices are going to go up, absolutely,” said Dennis Falaschi,manager of the Panoche Water District, as he drove his pickup truck past bone-dry fields of almond trees and grapevines on an unseasonably warm day recently.

WaterFX’s project exploits two things the Central Valley possesses in abundance — fallow land and sunshine — to cut desalinization costs.
The parabolic-shaped receiver is a standard unit made by a Colorado company called SkyFuel for solar thermal power plants. It uses a reflective
film rather than expensive mirrors to focus the sun on tubes containing mineral oil that are suspended over the solar array. As the oil warms to 248 degrees, the heat is piped into refurbished,1960s-era evaporators to generate steam. The steam then condenses fresh water and separates the salts and heavy metals. The cycle is repeated to further concentrate the brine.

WaterFX relies on off-the-shelf equipment except for a heat pump of its own design. The pump recycles excess steam for reuse through a chemical
process rather relying on an electricity-driven compressor.“It cuts the number of solar collectors you need roughly in half,” Mr. Mandell said. That savings means WaterFX can purify water using half as much energy as conventional desalinization.

During the pilot project, WaterFX produced 14,000 gallons of purified water a day. A commercial version of the plant, set to be built this year on 31 acres of land, will produce 2,200 acre-feet a year. That’s the amount of water that would cover an acre of land at a depth of one foot, or 717 million gallons. The company will store excess heat generated by the solar array in molten salt to allow the plant to operate 24 hours a day.

Mr. Mandell said WaterFX currently produces an acre-foot of water for $450. That compares to about $280 an acre-foot charged by the Central
Valley Project — when water is available. This year, farmers in the Panoche district will receive no water. Last year, they received only 20 percent of their allocation, Mr. Falaschi said. In 2012, the allocation was 40 percent. Farmers elsewhere who rely on the State Water Project to irrigate 750,000 acres of farmland will also receive no water in 2014.

For agricultural water districts like Panoche, solar thermal desalinization promises to solve two persistent problems. One is a chronic
water shortage, even in rainy years, as regulators divert water to cities and for environmental purposes, like protecting endangered fish.
The other is the growing salt contamination of agricultural land that has led farmers to abandon more than 100,000 acres in the Central Valley in recent years.

For decades, water districts like Panoche have drained salty groundwater and disposed of it in places like the San Joaquin River. But new
environmental restrictions ban that practice. WaterFX could reduce the volume of drainage water that needs to be diverted while providing a new supply of fresh water for irrigation that is not dependent on the vagaries of snowpack and rainfall in far-off parts of the state.

“This subsurface groundwater is a possible gold mine,” Mr. Falaschi said. “You’re taking a water supply that is unusable now and you’re
converting it to a usable source.”

The desalinated water is of bottled-water quality, purer than what is needed for irrigation.

“We’re creating more water that can be transferred to other markets,” said Mr. Mandell, 38, a technology entrepreneur, who co-founded the
renewable energy companies AltaRock Energy and Coskata. “In some instances, that may be water that goes into the municipal-industrial market,
which is a higher-paying market.”

Michael Hanemann, a professor of agricultural and resource economics at the University of California, Berkeley, called desalinization a hedge against future shortages and the rising price of water. “It’s a form of insurance,” he said. “The issue isn’t turning over your whole water supply to desalinization but adding to it.”

Professor Hanemann said the economic viability of WaterFX’s technology depended on how much water farmers would have to buy on expensive spot markets because of drought and climate change. The more water they buy, and the greater the uncertainty surrounding future supplies,
the more attractive desalinization becomes.

He noted that traditional desalinization plants carried high capital costs as they were often built as backup sources of water and operated
infrequently. A solar thermal desalinization plant that runs continuously and relies on free sunlight for fuel could make the technology more competitive, he said.

Standard desalinization plants rely on membranes to filter out salt and other impurities from seawater. The process, called reverse osmosis, is
expensive. Membranes must be periodically replaced, and forcing seawater through them is energy-intensive, with electricity typically accounting for around a third of operating costs.

Given the high price of desalinization, most projects have been built in water-stressed regions, like the Middle East. But as water shortages persist in California, cities like San Diego are building desalinization plants. A project under construction north of the city, for instance, carries a construction cost of $700 million.

A $30 million, federally funded reverse osmosis plant, which will also treat drainage water, is being built next to the WaterFX pilot project.
Brent Giles, a senior analyst at Lux Research, said solar thermal desalinization’s competitiveness with reverse osmosis remained to be seen.
He noted that contaminated water like that found in the Central Valley contained far less salt than seawater and required less energy to purify.

“But for specialized applications like agriculture, I can see there being some value to solar thermal desalinization, ” Mr. Giles said.

WaterFX is among a small number of efforts to use the sun to desalinate water. A company called Sundrop Farms is using solar thermal technology
similar to WaterFX’s to desalinate seawater for use in growing greenhouse crops in southern Australia.

“It’s a technology that will ultimately be able to treat hundreds of thousands of acre-feet of water without having an enormous impact on the
environment or on the economics of agriculture,” Mr. Mandell said.