Posted on April 4, 2014 by Office of Public Affairs 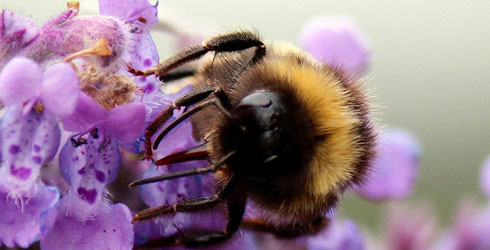 LOCKEFORD, Calif. — Helping America’s beleaguered bees could start with something as humble as planting a shrub.

Here in California’s Central Valley, researchers are trying to find assortments of bee-friendly plants that local farmers and ranchers can easily grow, whether in unusable corners and borders of their land or on acreage set aside with government support.

Bees could certainly use the assist. Since 2006, the commercial beekeepers who raise honeybees and transport them across the country to pollinate crops have reported losing a third of their colonies each year, on average.

Native species of bees, too, have been in decline. That is taking a toll on crops that rely on bees for pollination, including many nuts and fruits. The Department of Agriculture says that one of every three bites that Americans take is affected, directly or indirectly, by bees. They cause an estimated $15 billion increase in agricultural crop value each year.

The causes of the decline, known as colony collapse disorder, are still being studied. But they appear to be a combination of factors that include parasites, infection and insecticides. Underlying all of these problems is the loss of uncultivated fields with their broad assortment of pollen-rich plants that sustain bees. That land has been developed commercially or converted to farming corn, soybeans and other crops.

The federal government has announced a new $3 million program to step up support for honeybees in five states in the Upper Midwest. Those five — Michigan, Minnesota, Wisconsin and North and South Dakota — have huge numbers of honeybee colonies at various times of the year, perhaps 65 percent of the nation’s total. Beekeepers truck them around the country in the spring to pollinate commercial crops.

The new program will encourage farmers and ranchers to grow alfalfa, clover and other crops favored by bees and which serve a second purpose of being forage for livestock. Other proposed changes in practices include fencing property for managing grazing pastures in rotation so that they can replenish, leaving living plants for the bees.

Jeffery S. Pettis, who leads bee research at the federal Agricultural Research Service in Beltsville, Md., said the effort to get farmers to plant more crops with pollinators like bees and butterflies in mind was intended to help the creatures weather the challenges of pathogens, parasites and pesticides. “If they have a good nutritional foundation, they can survive some of the things they are faced with,” Dr. Pettis said.

The federal agency that focuses heavily on these issues, the Natural Resources Conservation Service, began in the 1930s as a government effort to help farmers hold on to soil and prevent dust bowls. The 2008 farm bill called for the service to include fostering pollinator health in its efforts in all 50 states.

That, in turn, has led to about 43 million acres of land across the country incorporating conservation features that support pollinator health. From 2009 to 2012, the bill’s environmental quality incentive program spread around $630 million.

In the Central Valley, the research to support that work is done on 106 acres of prime farmland at a Department of Agriculture plant materials center. The results are beautiful: More than 2,200 feet of hedges and fields of blended crops present a feast for the eyes — and for bees — beginning in early spring. On a recent viewing, flowers dotted the landscape with color. The bright orange flowers of California poppies opened near rich purple lupines. Last year, an entomologist found about 50 species of bees and 1,500 other beneficial insects, birds and creatures of all sorts in the hedgerows.

Jessa Cruz, a senior pollinator conservation specialist with the Xerces Society, a nonprofit organization dedicated to improving pollinator health that is collaborating with the center, said drought-resistant plants that are bee friendly are increasingly important in arid California.

“It’s important to be able to tell farmers, ‘You’re not going to have to use your precious water to irrigate your hedgerows,’ ” Ms. Cruz said.

The use of hedgerows and cover crops is on display at nearby Vino Farms, whose grapes are bought by 180 wineries. Growing among the vines are peas and beans, aromatic sage, golden currant, wild rose and even daikon radish.

Chris Storm, the director of viticulture for the company, said that even though grapes are self-fertilizing and do not need bees in the way that the nearby almond orchards do, “We’re doing it for everybody else,” providing a habitat for bees pollinating other crops nearby.

Vino Farms receives other benefits from the plantings, which help reduce the use of pesticides by supporting beneficial creatures like the tiny wasps and green lacewings that kill pests. Mr. Storm has taken out rows of vines for some hedgerows, and has flowering plants growing at the base of vines.

His company’s efforts also allow it to assert that it grows grapes sustainably. The certified sustainable production, he said, can bring a 10 percent increase in price from winemakers looking for a green edge. That translates to anything from $250 to $500 more per ton.

“It doesn’t yet pay for itself,” he said, though he clearly expects it to. It also helps that Mr. Storm is as adept at raising money from government conservation programs as he is at raising grapes and pollinating plants. He is constantly on the lookout for federal and state programs that will help pay for new techniques.

A mix of plants that works beautifully in California’s Central Valley will not necessarily be much good in the Upper Midwest, said Laurie Davies Adams, the executive director of the Pollinator Partnership, which promotes the health of bees, butterflies and other plant helpers.

“When I talk about hedgerows to guys in Iowa, they just kind of glaze over,” Ms. Adams said. The big bushes would interfere with the giant equipment those farmers use, she said, but they might be persuaded to set aside small plots of land for pollen-rich plants, which can help accomplish the same conservation goals.

“This is not one size fits all,” she said. “This is one ethic fits all.”

A major commercial beekeeper, John Miller, said that the multimillion-dollar pollinator program for the Upper Midwest would not work miracles. Spreading the money across five states over several years, he said, doing a little “shirttail math,” means that “you’ve got about a Dixie cup worth of seeds going into a field” in any one season.

He added, however, that the program is good news because it means “the pendulum, perhaps, is beginning to swing back” to paying attention to the role of bees in the food supply.

Surging corn prices have led farmers to grow on every available acre, which has been bad for bee habitats. A. Gary Shilling, an economic consultant, asset manager and avid beekeeper in New Jersey, said corn prices had been coming down again, and that should affect the number of acres they plant. “There will be less incentive to plant fence-row to fence-row,” he said. So pollinator plantings could make a comeback, especially if social pressure encourages farmers to support bees.

“This is a business,” Mr. Shilling said. “Are these guys going to go out of their way for something that’s going to hurt their business, affect their bottom line? Not unless they think they’ll catch some flak if they won’t.”