Note – The farmer profiled in this story, Vonita Murray, was featured last year in CDFA’s Growing California video series. The segment can be viewed at the end of this story. 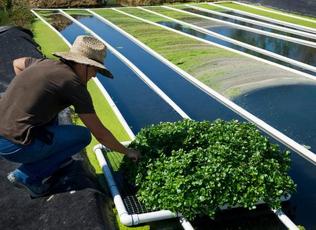 Farming wasn’t Vonita Murray’s first choice, but after making a drastic career change, the 38-year-old Navy veteran, former office manager and longtime fitness enthusiastic now believes digging in the dirt, growing food and being her own boss may be the dream job she has always wanted.

The transition to farming for Murray, 38, happened gradually over the past several years. She eventually took stock of her life, sized up her talents, sharpened the focus on her dreams and decided she was no longer cut out for a desk job.

For several years, Murray had been an office manager and a CAD, or computer-assisted design, technician for an architecture firm. Much of her work focused on remodeling floor plans for a major fast food chain’s Northern California stores. But when the economic downturn hit the architecture and design industry, Murray got laid off. She saw it as a chance to make a change in her life.

“It was the best thing that ever happened to me,” she said.

Using a $5,000 grant she received from the Davis-based Farmer Veteran Coalition, Murray bought some basic farm equipment and managed to launch her new career. She also enrolled in the first class of the California Farm Academy, a six-month farming course run by the Center for Land-based Learning in Winters.

Murray knows it will take hard work and several years before she can make a comfortable living as a farmer. But she has a long-term plan and says farming – including many 12-hour days – is exactly the lifestyle she was seeking.

“I’ve never been so tired, so broke and so happy,” she said with a laugh. “For the first time in my life, I have worth and a purpose. What I do has value in people’s lives.”

More and more veterans are turning to farming to connect in a similar way. “We’re all a family and we all try to help each other succeed,” Murray said.

When Michael O’Gorman founded the Farmer Veteran Coalition in 2009, he searched throughout the U.S. and found just nine veterans interested in going into farming. By the end of that year, the number was up to 30. These days, O’Gorman and his group have helped 3,000 veterans transition into farming.

“What’s really attracting veterans to agriculture is it offers a sense of purpose and a sense of mission,” said O’Gorman, who has farmed for 40 years. “It’s about feeding their country, offeringfood security and a better diet.”

O’Gorman is seeing more women get into farming and says Murray is a great role model.

“Vonita is dynamic, creative, energetic and smart. Whatever she does, she will do it well and take it places,” he said. “She’s a growing phenomenon. About 15 percent of those who serve in the military are women and that’s about the same percentage we hear from. More and more women are going into agriculture. The military and farming are both male-dominated. The women who have taken on both of them just seem like a really exceptional group.”

Those who encounter Murray are often impressed by her energy and her holistic, lead-by-example approach to farming. Not only does she want to grow good food, she sees the work she does as a way to help people be healthy. Indeed, Murray’s physical presence says plenty. Though she no longer trains as a bodybuilder, she remains noticeably lean and muscular. Her workouts these days focus on functional training and she is a big advocate of Crossfit, which combines classic weightlifting with mobility exercises.

“I’m doing all this because I want to get people healthy,” said Murray, noting that she hopes to someday build an obstacle course on the property so people can use it to work out.

She also has a penchant for unorthodox and innovative approaches to growing food. Standing on a portion of the land she leases in rural Elverta next to the renowned Sterling Caviar facility, Murray watches water stream past. It’s runoff from the tanks where sturgeon are raised for their prized caviar. It’s also the key to what she will grow on her new “farm” site.

The water goes through a settling pond to separate solids from liquids, travels through a moat and into small ponds where Murray is growing produce she sells to restaurants and to a growing number of customers at the Saturday farmers market in Oak Park.

“It’s an excellent use of water,” Murray said as she walked part of the nine acres she leases from the caviar company. In addition to the produce she is growing – squash, melons, heirloom tomatoes, mustard greens and more – Murray is raising free-range, organic chickens that lay about 10 dozen eggs a day. She hopes to soon expand to rabbits and other non-GMO (genetically modified organism) meat.

The outgoing and optimistic Murray has put some of her energy into tapping resources that can help get her going in farming. She obtained a $35,000 low-interest loan from the U.S. Department of Agriculture. She also received a grant to buy a 1956 Ford pickup truck, which she plans to use to sell her produce in low-income areas, in partnership with the Yolo County Family Resource Center.

Murray, whose produce operation is going to specialize in watercress, says she would have been at a loss as to how to proceed as a farmer without the education she got at the California Farm Academy. The program costs about $2,600 and various grants subsidize the tuition, according to Dawnie Andrak, director of development for the Center of Land-Based Learning.

Those who enroll run the gamut of age and work background. About 20 students graduate each year. To make it a real-world experience, they write a business plan and present it to a panel composed of people from the banking, business and farm community.

“There are more women like Vonita getting into farming,” Andrak said. “You will not find someone more dedicated and more clear about what it is she wants to do. She is certainly not one to give up.”

Jennifer Taylor, the director of the Farm Academy, is herself an example of a woman who made the career leap into farming. She was a research biologist who had no idea until well after college that a life in agriculture might appeal to her. She landed a four-month internship on a farm, was given four calves and eventually rented a barn and started dairy farming.

“If you have no connection to agriculture, it’s very difficult to imagine yourself doing it, Taylor said. “It’s a way many people want to live, an opportunity to be your own boss, work outside with your hands and be your own boss.”

But can you make a living?

“That depends,” said Taylor, noting that one young farmer from the program now sells to about 50 Bay Area restaurants and nets about $75,000 a year.

Back in Elverta, Murray is busy tending her crops and her chickens. She’s not making a profit yet, but she knows it takes time. More than anything, she loves the work, the lifestyle and the mission. She sometimes feels the stress of having debt and not knowing whether her crops will thrive.

But her farm is called Thrive Acres for a reason.

“You have to keep dreaming,” she said with a smile. “This is just the beginning.”