Posted on July 1, 2014 by Office of Public Affairs 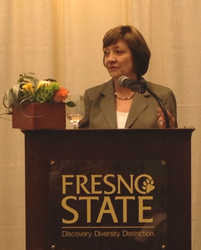 Two top state officials for agriculture and tourism paid Fresno a visit Monday to talk about how local growers can benefit from the fast-growing trend of agritourism.

About 60 agriculture and business leaders gathered at the California State University, Fresno campus to hear Food and Agriculture Secretary Karen Ross and Caroline Beteta, Visit California’s chief executive officer, explain how the CA Grown and Visit California brands will work with Sunset and Food and Wine magazines to promote agritourism.

Self-proclaimed foodies want to see where their meals comes from and meet the farmers behind this farm-to-fork movement.

“It’s about, ‘here’s what farmers and ranchers are doing as your neighbors,’ their environmental stewardship,” said Ross. “It’s about the pride of what we produce here, and it’s about this wonderful lifestyle and supporting the economy at the same time.”

Fresno County is the top producing agriculture county in the nation with the value of the 2012 crops reaching $6.5 billion. Of the $112 billion spent on tourism in 2012 in California, about a fourth of that was spent on food.

That same year, tourism brought $1.3 billion to Fresno County, according to Ross. Much of this is due to Yosemite tourists, the Blossom Trail and Fruit Trail, she said.

The Blossom Trail is a self-guided motor and bike tour of blossoming orchards along Fresno Country roads. The Fruit Trail is similar to a wine trail and features a drive through the county where visitors can taste and purchase local produce fresh from the farm.

The University of California at Davis runs the agricultural tourism directory for the state. Penny Leff, the agritourism coordinator with UC Davis and the Small Farm Program, said that from 2007 to 2012, agritourism has really picked up in California.

“Most families don’t have anyone on the farm anymore to go visit,” said Leff. “Farmers are interested in educating the public in what’s going on, what goes into making the food. They really want to share with the public and make them understand.”

According to UC data, the amount of sales from agritourism and recreation services has increased 84% in the state from 2007 to 2012, to $64.5 million.

A Sanger couple has seen the rise of agritourism first hand. Debbie Van Haun and her husband, Jim, own a bed and breakfast with a winery attached. She said that during the busy summer season, the area could use more businesses to handle all the tourists.

Van Haun said that most of their business comes from tourists traveling to Yosemite or Sequoia Kings Canyon National Parks, but they do see local couples trying to get away for an anniversary weekend.

“It’s a lot of hard work and is a labor of love,” Van Haun said. “We moved here thinking agritourism would make a difference in the area and it has.”

The couple opened Sequoia View Bed and Breakfast first about 15 years ago, and fixed up the vineyard in 2003. They produce 130 barrels, or 7,800 gallons, of mostly red wines annually.

Van Haun said that the Blossom Trail and Fruit Trail have increased the agritourism in the Sanger area, and the couple attributes much of the credit to the Fresno County Office of Tourism.

With the booming wine industry and traffic picking up at the bed and breakfast, Van Haun said she is seeing their revenue return to what it was in 2008.

Through CA Grown and Visit California, the state hopes to create the kind of interest in locally grown food to rival the desire people have for California wine, Beteta said.