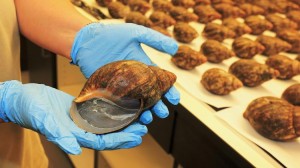 The snails, which weighed a total of more than 35 pounds and reportedly were intended for human consumption, was apparently the largest seizure at LAX of the mollusks, which are sometimes fried and served as a snack.

The snails were discovered July 1 in two picnic baskets, which weighed more than 35 pounds, said Lee Harty of U.S. Customs and Border Protection.

The snails arrived from Lagos, Nigeria, and were headed to San Dimas, she said.

In the past, federal inspectors have discovered one or two of the large snails hidden in luggage, but this marked “the first time this pest has been encountered in such large quantity and as a consumption entry” in Los Angeles, said Todd C. Owen, director of field operations for the customs agency.

Giant African snails, also known as land snails, can live as long as 10 years and grow up to eight inches long. The snails can carry parasites harmful to humans.

The U.S. Department of Agriculture deems the large snails as a damaging species, consuming more than 500 types of plants, according to federal authorities.

But when the snails can’t find fruits and vegetables to eat, they will “eat paint and stucco off of houses,” the customs agency said in a statement.

The incident remains under investigation.