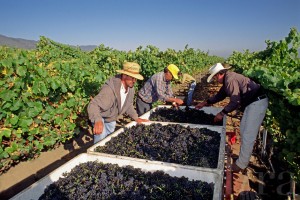 In the first of its kind in the state, an accord has been hammered out between the Monterey County Agricultural Commissioner and a Salinas farm-worker advocacy group to form a panel that will jointly tackle issues such as worker safety and pesticide protection.

The accord is important in both historical and future contexts. Historically, agricultural commissioners and farm-worker groups have not been exactly simpatico. But by striking this accord and forming a Farmworker Advisory Committee attached to the commissioner’s office, the hope is the future will see more collaboration than conflict.

In the past, issues such as farm-worker exposure to pesticides were settled often by acrimonious lawsuits brought by organizations such as the Center for Community Advocacy, the grass-roots farm-worker advocacy group that joined with Agricultural Commissioner Eric Lauritzen to forge the advisory committee.

At the event announcing the pact, there were even moments of levity.

“In 1974, fresh out of college, I came down here to fight growers … like Jim Bogart,” said Juan Uranga, the executive director and lead attorney for CCA, nodding toward the president of the Salinas-based Grower-Shipper Association, who attended the media conference. Bogart, laughing, noted that his board of directors unanimously supported the formation of the advisory committee.

“This is a new era where we focus on commonalities and building the kind of relationships we have now that lead to forming a farm-worker advisory committee,” Uranga said at the conference at the Agricultural Center in Salinas, which houses the commissioner’s office.

In addition to Bogart, the news conference was attended by Chris Reardon, the chief deputy director of the California Department of Pesticide Regulation. Flanking Uranga and Lauritzen were a score of staff members who will compose the advisory committee.

“The advisory committee gives us direct access to farm-worker leaders, to their concerns and to their suggestions,” Lauritzen said. “This gives us the opportunity to engage in positive, productive conversations that will help us fulfill our obligations to the farm-worker community and to the agricultural industry in general.”

One of the committee members is Teo Gonzalez, the chief deputy agricultural commissioner, whose personal story makes him an ideal fit to serve on the committee. Twenty-six years ago Gonzalez was picking lettuce in the Salinas Valley. He earned a degree in agricultural economics from Universidad Autónoma de Chapingo in Mexico City and his green card to work in the United States.

“I talked to my father about coming here, and he told me to go for it,” Gonzalez said after the press conference. “I didn’t know the language but I had my hands.”

Eventually Gonzalez worked up the nerve to walk into Lauritzen’s office, unannounced, and ask for a job. Three months later he was offered a position. That was 14 years ago.

Gonzalez said he hopes the first goal of the committee will be to “establish a baseline for communication.” It’s important, he said, to have clear answers to the questions, “Why are we here and what do we want to accomplish?” – a foundation for action.

The first building block to that foundation is a statement of purpose, worked out between the CCA and the vommissioner’s office, with four key goals:

• To meet at regular intervals with the commissioner and staff to exchange information and ideas to improve the safety of farm workers.

• To help disseminate safety information for the commissioner’s office to farm workers.

• To host annual forums to discuss the commissioner’s jurisdiction over agricultural lands in the county.

• To promote a more sustainable agricultural economy by protecting its most critical resource: farm workers.

With a turbulent history in the Salinas Valley dating back to Cesar Chavez and his United Farm Worker movement in the 1960s and ’70s, and again with the passing of Proposition 187 in 1994 that was seen by many as a racist prohibition preventing undocumented workers from receiving health care, public education or social services, a basic distrust of government and the agricultural industry became grounded in farm-worker culture.

Paulina Mejia, an agricultural inspector and biologist with the Agricultural Commissioner’s office and a member of the advisory committee, said following the press conference Tuesday that one of her immediate goals is to forge trusting relationships with farm workers.

“When I’m out in the fields, there’s a hesitation when we drive up in county trucks,” Mejia said. “Many farm workers don’t understand we are here to help them. I want to ensure they are comfortable enough to approach us.”