Posted on September 30, 2014 by Office of Public Affairs 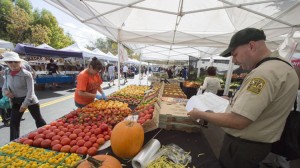 Bringing to fruition a decade-long campaign by farmers market stakeholders, on Friday, California Gov. Jerry Brown signed AB 1871, which for the first time provides what supporters say is adequate funding to ensure that growers at certified farmers markets produce what they sell.

“This is the single-most significant change to farmers market laws since they were established in 1977,” said Ben Feldman, chair of the California Alliance of Farmers’ Markets.

Starting Jan. 1, 2015, the bill will increase the state fee paid by markets for their vendors from 60 cents to $2 daily. Currently only farmers pay the fee, but next year it will extend to all vendors, including food and crafts sellers in non-agricultural sections.

Legislative analysts have estimated that the bill will raise $1.35 million annually, including more than $1 million in new revenues, which will go to the California Department of Food and Agriculture. It will be used chiefly for hiring new state inspectors and reimbursing counties for local investigative work, as well as maintaining a database of markets and growers.

Across the state, consumers should see more inspectors at farmers markets. As cheaters are caught and fined or suspended from participation, shoppers will have greater confidence that the farms they buy from really grew the produce. In the short term, they may also see a reduction in the quantity and variety of produce at certain markets, as cheating becomes more difficult.

Among other noteworthy provisions of the bill, vendors will no longer be allowed to sell “fresh whole fruits, nuts, vegetables and flowers” in adjacent non-agricultural sections of markets.

Noncertified flower vendors are the most common of these. Depending on how state regulators interpret the law, well-known mushroom resellers such as David West and LA Funghi may be excluded from markets, unless they restructure to become growers. Noncertified vendors of juices and dried fruits will not be affected.

Growers will be required to post conspicuous signs with the name and location of their farm, which will be helpful for shoppers. The sign must also state “We grow what we sell,” a declaration that may appear superfluous (vendors in agricultural sections already are supposed to grow what they sell), but is intended to make cheating a more clear-cut violation. The bill creates a new misdemeanor, making false statements about the grower, growing area or growing practices of agricultural products punishable by a fine of up to $2,500 and imprisonment of up to six months.

In late 2012, stung by media exposes of farmers market cheating, Los Angeles County Agricultural Commissioner Kurt Floren boosted enforcement. Since then, inspectors have issued 66 citations for cheating, resulting in multiple fines totaling up to $6,600 per vendor, and 16 suspensions and proposed suspensions, said Ed Williams, deputy agricultural commissioner. This is a huge change from previous years, when only a few citations were issued.

Los Angeles County inspectors will now have a long-term source of funding for enforcement, and when they suspect a vendor of cheating, they will have greater assurance that their counterparts in other counties will have the resources to conduct timely farm visits. A pilot program funded by the state Department of Food and Agriculture between May 1 and June 20 proved effective in coordinating enforcement efforts between Los Angeles and eight other counties, according to a report presented at a farmers market advisory meeting in Sacramento on Sept. 17.

A survey of a dozen farmers and shoppers at markets last weekend found almost unanimous support for enhanced enforcement. As he loaded his cart at the Hollywood farmers market, Daniel Mattern, chef of Cooks County restaurant, said that AB 1871 will “help protect me, because as someone who buys a lot of produce at farmers markets, I like to know that it’s actually coming from the farm I buy it from.”

“The devil’s in the details whether enforcement will be effective, but I’m cautiously optimistic,” said Scott Beylik, a vegetable grower in Fillmore.