Veggies on the roof: Urban farming in LA – from the Los Angeles Times

Posted on November 13, 2014 by Office of Public Affairs 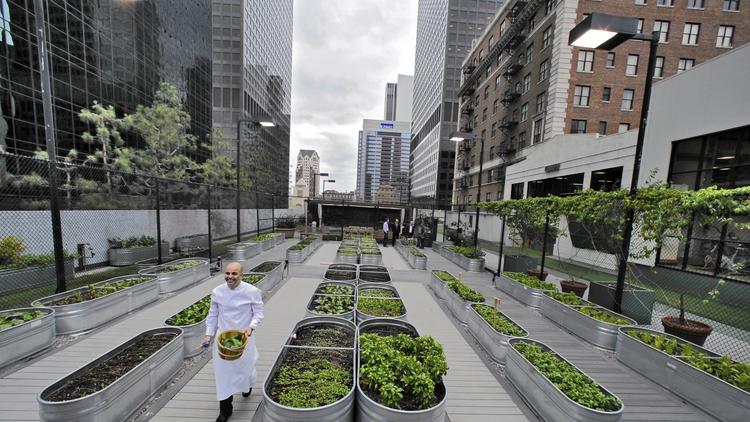 Galvanized horse troughs are used to grow a wide array of vegetables on top of the Jonathan Club. (Irfan Khan, Los Angeles Times)

At the Jonathan Club downtown, not everyone took it well when an infrequently used paddle tennis court on a fifth-floor roof was sacrificed to gem lettuce, swiss chard and microgreens.

Executive chef Jason McClain, of course, was thrilled. His father, a retired landscape architect, flew in from Alabama to build the garden, installing neat rows of galvanized horse troughs in which vegetables and herbs now grow.

“I mean, you cut a tomato and it’s like a real tomato. The juice runs down your arm. It’s never been refrigerated,” McClain, dressed in crisp fresh chef’s whites, said Tuesday morning to a busload of visitors on a daylong tour of urban agriculture and local food systems.

“It’s just magical. You’re in the middle of downtown Los Angeles. It’s really great at 5 o’clock, when the traffic’s going and you hear the obscenities, and I’m up here snipping arugula.”

The visitors — who included growers, urban policymakers, consultants, entrepreneurs and representatives of nonprofits — wandered around the vegetable beds and asked questions as they got a taste of the garden.

A serious, note-taking group, the visitors were interested in the practical ins and outs: That the garden yields as much as $150,000 worth of produce every year. That it cost about $40,000 to build. That it provides work for a local urban farming venture called Farmscape Gardens, whose farmers plant the Jonathan Club’s seeds, compost the beds and rotate the crops.

The tour was organized by Seedstock, a Los Angeles-based company that offers consulting services and disseminates information about sustainable food projects. It hosts an annual conference on sustainable agriculture, which begins Wednesday at the UCLA Anderson School of Management. This year’s theme is “Reintegrating Agriculture: Local Food Systems and the Future of Cities.”

As they left the 120-year-old private club and headed back to the bus, tour members talked about what they had seen. Didn’t the galvanized tubs burn up in summer? Did that tree really produce edible olives?

Niki Mazaroli, program officer at the Leichtag Foundation in Encinitas, said one of her foundation’s aims is to help struggling people reach self-sufficiency. She said she hoped Jonathan Club members with means might look at the garden there and get inspired to invest in the sort of urban agriculture projects that create livable-wage jobs.

That was the kind of effort underway at the next stop — a farm on the grounds of Pasadena’s Muir High School that was as wild and lush and loud as the Jonathan Club garden was tidy, crisp and quiet.

Mud Baron, the goateed project director, wore flip-flops, sunglasses and a brown cap that said “GROW!” in big green letters. On the belt of his jeans was a leather holster keeping his pruners at the ready.

He spoke of the farm’s community-supported agriculture program, in which people subscribe to get weekly flowers or boxes of fresh produce. How much of what’s in the selection comes from the farm, but he also buys from other local farmers, thus helping support them. How, contrary to its reputation, Pasadena has many people in need, including many Muir families. How getting young people interested in the garden was one way to push them toward better futures.

Looking out over the rows of vegetables and flowers, he pointed to a young man who was helping set up a long table for lunch. Manny, he said, now 20, had gotten training in the garden, learning how to plant and install irrigation systems. He’d also learned about flowers and had just done all the flowers for a wedding, earning $20 an hour.

“At the heart of what I’m trying to do is to teach these kids to be entrepreneurs,” said Baron, who then talked of further plans — for a food truck run by students and a charter school centered on making things — that would teach kids how to grow vegetables, how to pickle, how to weld benches and how “to really do something.”

A catered lunch in the garden came next, featuring salads of kale and quinoa. Baron clipped flowers and arranged them like headdresses, which he got the visitors to place on their heads. He took photographs. Everyone laughed.

Then it was off to Glassell Park to a simple brick building that until recently had stored Chinese noodles. But soon — when construction is finished — it will contain individual production spaces for 50 wholesale food makers, with all sorts of support services on site. There also will be a nonprofit taking locally grown food that otherwise would go to waste and turning it into healthy meals for senior citizens, while at the same time training a workforce of young people aged out of foster care and older people just out of prison.

These two projects, L.A. Prep and L.A. Kitchen, certainly sounded exciting, but they were almost too much to process at once on such a bountiful day.