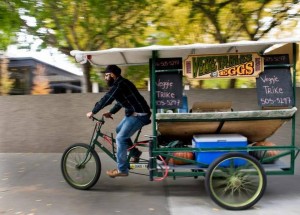 Like a jovial street merchant from days of old, a bearded Collin Samaan stood on Liestal Row between 17th and 18th streets Friday in Sacramento, vending healthy foods out of his newly christened West Sac Veggie Trike.

The pedal-powered produce-mobile has three wheels, one in front of Samaan’s bike seat and the other two behind him, supporting the bed of a miniature farm stand. In the back are stashes of persimmons, onions, Apple Hill apples, artisan garlic salts and even kiwis. A cooler holds carrots and rainbow chard, most of it harvested that morning.

Samaan’s haul comes from a handful of farms in the Sacramento area, including Abbott Organics, where he and wife Aimee Benner grow garlic and greens and where the tricycle lives when not in action. For the past six weeks, he’s brought seasonal goods like apple and pumpkin pies from Bodhaine Ranch in Camino and jars of honey from Arden’s To Bee Young Apiaries to the midtown spot, hoping to catch lunchers passing by.

During the summer months when days were longer, Samaan had been pedaling the tricycle, which weighs a few hundred pounds loaded, all over Sacramento and West Sacramento trying to sell produce on residential streets. It’s decked out with a megaphone that he uses to play gypsy jazz as he cruises by at 8 to 10 mph.

“I’m roaming, playing, announcing and catching the squint of blinds,” he said. “I’m waving, they’re looking straight at (the tricycle), and usually that person will come out. … Every single person gets a smile and a wave and positivity. It feels good doing that.”

Now that daylight is waning earlier, Samaan is shifting from the “ice cream truck” model to a slightly more stationary method. On weekday afternoons, he bikes the goods in from West Sacramento and parks them in front of partner businesses downtown, such as Edible Pedal bike shop and delivery service, where he was Friday, and La Bonne Soupe Cafe at Eighth and J streets.

Dan Best, manager of more than a dozen Certified Farmers’ Markets in Sacramento County, said he has to close some of his locations during the winter because demand drops below a point of sustainability. The pedestrian markets, as he calls the downtown markets, draw people less consistently than community markets, such as the Sunday market held under the freeway, which survive year-round because people drive there to do the bulk of their grocery shopping.

“At the pedestrian markets, people just come check it out and maybe don’t buy much or anything at all,” he said. “There has to be enough customer base. We know it’s not penciling out, so we sometimes make the decision that this market is not supporting the farmers.”

But Samaan, a part-time farmer and part-time bike-building enthusiast, said he believes he can at least break even with community collaboration and the right advertising.

One couple who stopped by Friday said they put off going to the grocery store so they could visit the Veggie Trike. Rick Houston, a regular at Edible Pedal, took a photograph of the produce display and posted it on Facebook, hoping to draw more people to the stand.

“It’s indicative of where our priorities and our ethos are headed, in terms of eating properly … now it’s more accessible,” he said. “Obviously you’re not going to be able to have enough food for 100 people to get their groceries, but it’s nice for people to be able to come pick something up. It’s close. It’s clever.”

The Veggie Trike, which is licensed as a business through the city of West Sacramento, was constructed by Cycle Trucks, a West Sacramento business specializing in cargo bikes that are made for carrying loads. Samaan said he intends to work with the company to build a coffee tricycle, which he’ll use to tote local brews around the Capitol in the mornings.

For many in Sacramento, the concepts of quality food and quality bicycles go hand in hand. In addition to its function as a bike shop, Edible Pedal handles deliveries for Magpie Cafe, Hot Italian, Ginger Elizabeth Chocolates and other “slow food” institutions around Sacramento. Edible Pedal owner John Boyer said the Veggie Trike fits perfectly into the shop’s mission.

“It’s probably senior to the bikes here, the delivery of good quality food, especially to the workaday world down here,” he said. “We want to feed them right so they don’t fall asleep on their desks at 3 o’clock.”